Posted on December 1, 2014 by Office of Public Affairs 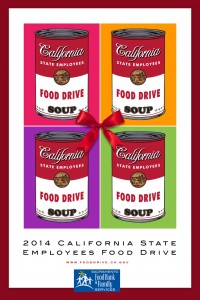 A partnership between California state employees and the Sacramento Food Bank has helped produce a record number of turkey donations. The food bank accepted more than 9,300 turkeys for needy families in the 2014 Turkey Drop, with 1,760 of them–more than 26,000 pounds (13 tons!)–provided by state employees.

The Turkey Drop is one element in the ongoing State Employees Food Drive. Other ways to contribute include a rice donation program and a continuing effort to collect canned food and other items. State offices throughout the region have staged colorful bins to make donations easy.

For our friends and foodies– tweet, Instagram or Facebook  – #CAGrown with a pic of California Grown produce and a pound of food will be donated to a local food bank.