Posted on December 18, 2014 by Office of Public Affairs 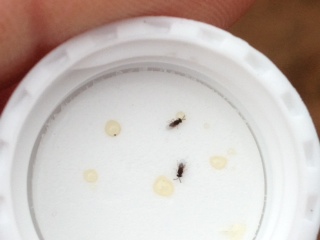 RIVERSIDE – Hundreds of wasps imported from Pakistan were released into a 7.5-acre biocontrol grove of citrus trees near the UCR Botanic Gardens by entomologists Tuesday.

The wasps, Diaphorencyrtus aligarhensis, are a natural known predator of the Asian citrus psyllid, which acts as a carrier of “Huanglongbing” — a devastating disease to citrus trees.

“We know from past experience this insect and disease combination can be very devastating to citrus,” said Mark Hoddle, the director of the UCR Center for Invasive Species Research.

“It’s had a huge impact in Florida. They’ve lost over 60,000 acres, maybe more, of citrus there and it cost them $200 million in profits. Six thousand people lost their job and the industry has started to detract in Florida.”

The insect was first detected in California in 2008 in San Diego and Imperial counties.

The psyllid has been detected in 12 California counties, according to the U.S. Department of Agriculture.

The disease was first detected in April 2012 in the Hacienda Heights area.

The insect poses a threat to California’s $2 billion citrus industry.

Hoddle and other entomologists traveled to Pakistan six times over a 2 ½ year period looking for natural enemies of the psyllid. They ended up in the Punjab region, which is about a 70 percent climate match to Southern California.

It is also thought that the Punjab region is the psyllid’s area of origin, Hoddle said.

They were given permission by the Department of Agriculture on Nov. 24 to release the wasp. It had been in quarantine for three years and underwent about two years of safety testing, Hoddle said.

The wasp poses no risk to the environment and does not sting people or pets. It does not eat plants or spread disease.

Psyllid nymphs have five developmental stages after they hatch from the egg.

Only the female wasps kill the psyllid, and they do it in two ways. They lay their eggs inside the psyllid nymph and the wasp larva then feeds on the nymph or the female uses her “ovipositor” to stab the nymph until it bleed. She then eats the insect’s blood, which provides the protein she needs to mature eggs.

The university’s biological control program aims to suppress the amount of psyllid in agricultural settings and urban areas, where it is difficult to spray residential trees.

“Some estimates suggest probably more citrus grown in people’s backyards than in all commercial areas combined in California,” Hoddle said.