Celebrating Fairness and Accuracy in the Marketplace: March 1-7 is National Weights and Measures Week

Posted on February 26, 2015 by Office of Public Affairs 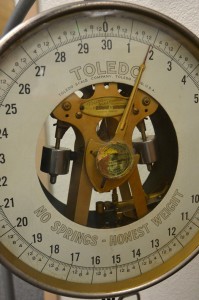 A taxi fare, an ounce of gold, a pound of butter, a milligram of medication, a ton of rice, an acre of land, a gallon of gas … What do they have in common? We get what we pay for because these measurements are made by machines and people who operate according to a recognized system called “weights and measures.”

March 1-7 is National Weights and Measures Week, celebrating the evolution of a system that dates back to 1799 in this country. Here in California, more than 1.4 million devices are used to weigh and measure in commercial transactions. CDFA’s Division of Measurement Standards teams with county officials to make sure these devices are accurate. Inspectors also verify that advertised prices match what is charged at the checkout counter, and they make sure the amount of a product inside the box matches the claims on the outside.

“Agriculture is a perfect example of an industry that benefits from a dependable, verifiable system of weights and measures,” says Kristin Macey, director of CDFA’s Division of Measurement Standards. “Over the years, our division’s work has expanded to encompass not just farm-related measurements but also alternative fuels, supermarket scanners, railway systems that weigh trains while they are in motion, and even software-based measuring systems for a broad range of commodities and industries.”

For commerce to function – whether it’s a purchase at the local farmers’ market or a contract between multinational corporations – the integrity of weights and measures is a foundational element of our system. Please join CDFA and measurement standards officials across the country in observing National Weights and Measures Week March 1-7.

For more information on the history of weights and measures in California, click here.