Rent a chicken – from The Consumerist 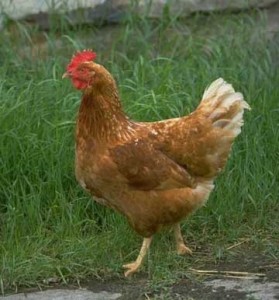 Because there are inevitably going to be those people who cannot stand to have something even one second after other people can get it, one company has started offering up chickens for rent, giving poultry hipsters a chance to get the very freshest eggs possible.

In all seriousness though, the whole thing is pretty funny — “Rent The Chicken” doesn’t roll off the tongue without a giggle, the owner tells the Associated Press.

“When I answer the phone and I say, ‘Rent The Chicken, this is Jenn,’ they giggle and say, ‘I would like to rent the chicken.’ And then they giggle some more,” she says.

Her Pennsylvania-based company is now in three other states as well as Toronto after two years of leasing chickens to people who want fresh eggs from humanely raised hens.

“As a society, we don’t really like commitment,” the owner explained. “We don’t want a contract on our cellphones; we don’t want long-term commitment with our cable company. With chickens, they can live to seven or 10 years, and people are a bit scared of that.”

But when you rent, you don’t have to worry about raising chickens in the long run, just about how long you want eggs. An example package would run a person $150 per month for two hens, a coop that can be easily moved around the yard, feed and help if you need it from the experts.

Other businesses are booming as well, with the owner of Rent a Coop in Maryland saying his company rents out 25 to 30 coops every month.

“I think it will be sustained,” he says of poultry leasing. “People want to know where their food comes from.”

Before you jump into chicken renting, companies suggest talking to your neighbors first to see if they’re cool with it, as well as checking with local ordinances or homeowners associations.

3 Responses to Rent a chicken – from The Consumerist