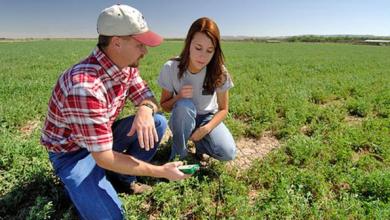 Just about everyone agrees that we need more farmers. Currently, nearly 30 percent are 65 or older, and fewer than 10 percent are under 35. The number of farmers is likely to fall further with continuing consolidation and technological innovation.

But displacement of farmers is neither desirable nor inevitable. We need to put more young people on smaller farms, the kinds that will grow nourishing food for people instead of food that sickens us or yields products intended for animals or cars.

The problem is land, which is often prohibitively expensive. Farmland near cities is prized by developers and the wealthy looking for vacation homes, hobby farms or secure investments. Many farmers have no choice but to rent land for a year or two before being asked to move and start all over, because the purchase of even the smallest plot is out of their reach.

There are credible efforts to provide farmworkers new opportunities, like land trusts for preserving farmland. There are also dozens of federal and state programs aimed at helping farmers get started, as well as farm business incubators like the one run by Glynwood in the Hudson River Valley. But the barriers to obtaining land remain high.

A new bill proposed by Representatives Joe Courtney, a Connecticut Democrat, and Chris Gibson, a New York Republican, and devised with input from the National Young Farmers Coalition, would improve the situation by forgiving the balance of student loans of those who spent 10 years as farmers and made loan payments during that time.

The bill would add farmers to the Public Service Loan Forgiveness Program, which already forgives student loans for police officers, prosecutors, nurses and others, so perhaps its best aspect is the cultural shift it represents, grouping farmers with others in public service.

“Conceptually, this isn’t radical or symbolic,” says Courtney. “It’s recognizing a huge work force need.” And, as Gibson says, it addresses megafarming: “In the five years from 2007 to 2012 we only gained a little over 1,200 farmers. Since we aren’t going to stop eating, we have to reverse that trend, or we’ll see even more consolidation, more corporate farms, or increasing food imports; none of that is in our interest.”

All of this is true. And arguing against a bill like this would be counterproductive. But there are a couple of immediate objections here. The first is that the program is only focused on helping people who’ve gone to college, a particular slice of the American pie that skews white and well off. (There is of course the obvious question of why we can’t provide free college education to anyone who wants it.)

Second, the terms seem onerous: It’s difficult enough to make a living farming, especially when starting out. Why not (as some state programs do) forgive the loan after a couple of years, with an agreement to keep farming?

“It’s a step in the right direction, but it’s not transformative,” says Blain Snipstal, an ecological farmer on Maryland’s Eastern Shore and a member of the Southeastern African-American Farmers’ Organic Network. As everyone knows, it’s difficult to pass anything creative and progressive in Washington right now, so seeing this bill through would be positive movement.

Still: The question of getting land into the hands of all who want and deserve it has been plaguing the United States since Reconstruction, when President Andrew Johnson rejected every effort to compensate former slaves with land. Remember “40 acres and a mule”? It didn’t happen.

Farming is — or should be — a social enterprise as much as a business, one that benefits all of us and uses the land conscientiously and ecologically. Thus in the long run we’ve got to expand our vision to include some kind of land redistribution that would give those who want to work the land for our mutual benefit the ability to do so.

Let’s remember that much of “our” land was acquired though the displacement and murder of millions of Native Americans, and that it was made productive by enslaved, indentured and undervalued labor; providing farming opportunities to more people would partially redress those issues.

We can continue to pretend that megafarmers who produce for export and nonfood purposes need public support, or we can create new policies that invest in a better kind of farming — and lots of new farmers eager to do it.