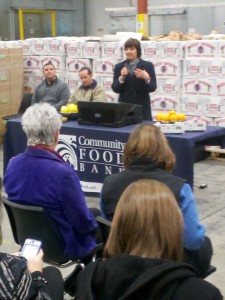 When Andy Souza, president of the Community Food Bank in Fresno, asked valley farmers for help to feed the needy, they donated by the truckload.

The result, Souza said Tuesday, was 40% more produce than last year for a total of 10 million pounds. In all, the food bank has distributed about 24 million pounds of food this year to 170 agencies serving the central San Joaquin Valley.

The extra help was important, Souza said, since the amount of nonperishable items such as canned food donated this year was relatively unchanged from the previous year.

“The agricultural community has been very supportive of our program,” Souza said. “They have really responded.”

Souza, along with state agriculture officials and farming companies, gathered Tuesday at the food bank’s southeast Fresno distribution center to recognize the efforts of Valley farmers and those statewide.

Both groups have been working to encourage farmers to donate food products.

Already, farmers statewide have donated more than 100 million pounds of food this year to local food banks and other charitable organizations.

Craig McNamara, president of the California State Board of Food, urged farmers to think about the needy when making planting decisions. He suggested planting an extra row of walnuts, citrus or whatever else the farmer produces.

At the Fresno food bank, McNamara and state Agriculture Secretary Karen Ross were flanked by hundreds of boxes or cartons of citrus, eggs, potatoes and kiwifruit.

Among those donating Tuesday were Jill Benson, vice president of J.S. West, an egg producer in Modesto.

“We do it because it is the right thing to do,” Benson said.

Others who donated to the Community Food Bank include Venida Packing Company in Exeter and Bee Sweet Citrus in Fowler.

Representatives of both companies challenged others to do their part to help fight hunger.

“We are a small family farm and we were able to donate 2 million pounds,” said Chris Tantau, operations manager for Venida.

“And if we can do that, there are a lot of others who have the opportunity to do more.”