The drought, a historical perspective – from the UC Davis Center for Watershed Sciences

Posted on September 24, 2015 by Office of Public Affairs 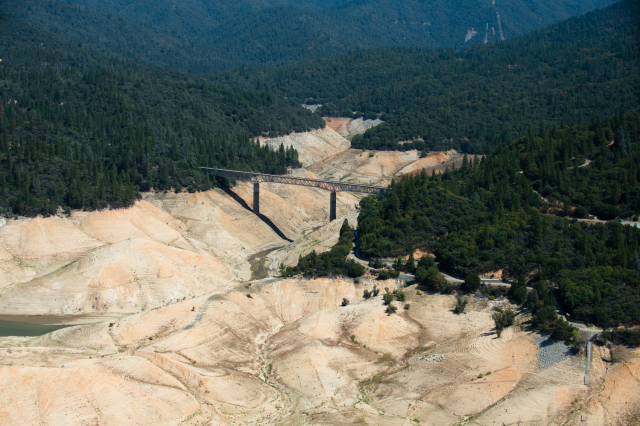 California’s ongoing drought will continue to break records and grab headlines, but it is unlikely to be especially rare from a water policy and management perspective.

Estimates of the current drought’s rarity range from once in 15 years to once in 1,200 years (Griffin and Anchukaitis 2014), depending on the region and indicators used (precipitation, stream runoff, soil moisture or snowpack). In the Middle Ages, large parts of California had droughts far worse than this one, some lasting more than a century (Stine 1994). The probability of California experiencing a once in 1,200-year drought during a short human lifetime is extremely low.

The chance that this dry period is a “new normal” is probably small. Many parts of Australia are paying for expensive desalination plants built when a severe drought was misinterpreted as a new normal. If this drought is as unusual as once in 1,200 years, then why pay heed beyond just getting through it? We are unlikely to see the likes of it again.

The obsession over El Niño and the California drought masks the reality that the atmospheric condition is poorly correlated with stream flows in Northern California, where 75 percent of the state’s water supply originates.

East Coast news media should keep this perspective: Every summer California has a drought far drier and longer than the eastern U.S. has ever seen. This explains California’s extensive water and irrigation infrastructure (and why people move to California).

The uniqueness of an individual drought is fascinating. Each drought is unique in area, persistence, dryness, temperature, internal pattern and how it ends. California’s current drought is unusually severe, and certainly the worst since 1988-1992. Groundwater in the Tulare basin is probably lower than at any time in human history. This drought also has been unusually warm, leading to it having the lowest snowpack in 500 years and driest soil in 1,200 years). In precipitation or stream flow, this drought so far is between the third and eighth driest years on record for most big rivers.

By focusing on unique aspects of a drought, any drought can become an incredibly rare event. Becoming engrossed in the superlatives, however, can distract from the business of managing water shortages and preparing longer-term solutions.

What’s more relevant for water policy and management is the banality of drought. We should expect to see droughts in California of severity similar to the current drought about once or twice in a generation. Given climate change and the growth in expectations and values for diverse water uses, it seems reasonable to expect such droughts a bit more frequently than in the past. The warmer temperatures in this drought seem likely to become normal for future droughts, with disproportionate effects on ecosystems and small streams.

Agencies, cities, bankers, insurers, farmers and residents should prepare for greater regularity of droughts as harsh as the current one. Severe drought in California should be reclassified from a rare “act of God” to something more like a business cycle swing that recurs several times in a lifetime or career.

California is managing pretty well under the current drought in most areas (Howitt et al. 2015; Hanak et al, 2015) and can survive much more severe and prolonged droughts, if managed well (Harou et al, 2010).

It is more important to focus on managing the dry event and preparing for future ones than understanding the fascinating intricacies of drought origins and statistics. But we probably will continue to obsess about drought statistics and El Niño anyway.