Posted on October 2, 2015 by Office of Public Affairs 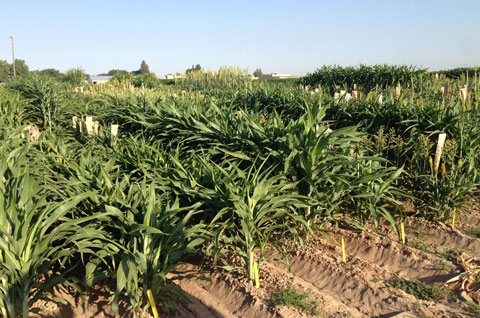 Sorghum at the UC Kearney Agricultural Research and Extension Center, where field testing will take place next year. (Photo by Peggy Lemaux)

UC Berkeley is leading a $12.3 million project funded by the U.S. Department of Energy to examine the role of epigenetics in allowing plants to survive in drought conditions, an increasing concern for agriculture as the effects of climate change are felt in California and globally.

UC Berkeley researchers will partner with scientists at UC Agriculture and Natural Resources, the Energy Department’s Joint Genome Institute and that agency’s Pacific Northwest National Laboratory on the five-year project, called Epigenetic Control of Drought Response in Sorghum, or EPICON.

The grant comes in the midst of a historic drought in California. Over three years of field testing, researchers will dissect mechanisms by which sorghum, a close relative of corn, is able to survive water deprivation.

“Historically, the genetic manipulation of crops, which has been critical to increasing agricultural productivity, has concentrated on altering the plant’s genetic sequence, encoded in its DNA,” said Lemaux. “However, recent studies have shown that environmental stresses – in our case drought – can lead to epigenetic changes in a plant’s genetic information. Because epigenetic changes occur without altering the underlying DNA sequence, they allow plants to respond to a changing environment more quickly.”

Over the next three years, a variety of observable plant traits will be followed, such as plant height and grain yield. In addition, leaf and root samples will be taken to investigate responses to drought at the molecular level, including how gene expression changes and which proteins and metabolites are altered.

Researchers will also be tracking changes in the sorghum-associated microbial communities to determine whether they correlate with changes that directly contribute to the crop’s drought tolerance. It is now well known that associations of specific bacteria and fungi with plants and animals have positive effects on host fitness. For example, microbes in both plants and humans are known to help fight disease and, in the soil, can help deliver nutrients and other resources to plants.

EPICON efforts will generate a variety of large datasets, which will be shared via an open, online platform that will include methods and results.

“Availability of this data in an open forum will enable comparative genomic studies by other scientists,” said Coleman-Derr, a UC Berkeley adjunct assistant professor in plant and microbial biology. “Being able to analyze the large datasets in an integrated fashion will enable a more thorough understanding of the complex and interconnected processes responsible for sorghum’s ability to respond positively to drought.”

The researchers expect that the project will allow better predictions of how sorghum and other cereal crops are affected by future climate scenarios, and will lead to approaches to improve growth and production of sorghum and other crops under water-limiting conditions in commercial fields and on marginal lands.

The Energy Department’s Genomic Science Program is funding this project through its Office of Biological and Environmental Research.