Posted on December 23, 2015 by Karen Ross, Secretary, California Department of Food and Agriculture 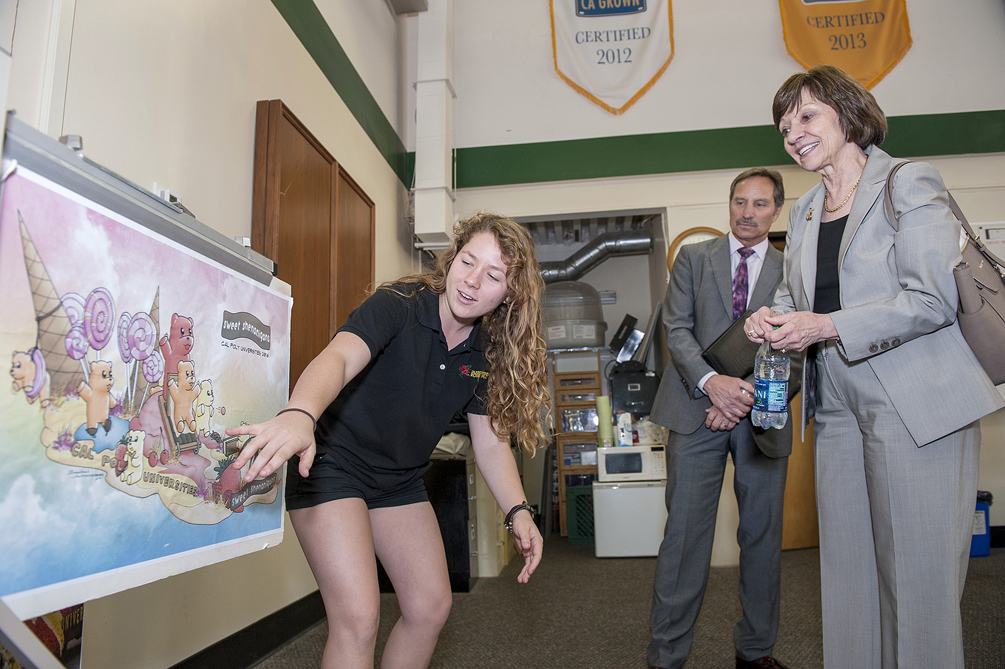 Morgan Montalvo, a mechanical engineering student who is construction chairman of the Cal Poly Rose Parade float team, explains the 2016 Tournament of Roses Parade entry, “Sweet Shenanigans,” to Secretary Ross and Andy Thulin, dean of the Cal Poly SLO’s College of Agriculture, Food & Environmental Sciences. Cal Poly’s campuses at San Luis Obispo and Pomona team up every year to produce the only student-built float in the parade. The float will also be one of four certified as California Grown, as it will contain flowers produced in-state.

One of my favorite traditions as secretary is the Rose Parade on New Year’s Day. Each year I have an opportunity to join our colleagues from California Grown as they certify that a select number of floats are comprised of at least 85 percent flowers and plants grown in California. This year, for the fifth year in a row, we expect to certify a float from Cal Poly (a partnership of both campuses – San Luis Obispo and Pomona). On a recent visit to the school I was able to meet the student leader chairing the effort and learn more about the exciting plans!

Our agricultural partnership with Cal Poly is crucial as we move into a future that will require more food production to nourish a rapidly growing world while minimizing our environmental footprint. We urgently need young people to pursue Ag careers as farmers, scientists, technicians, and public policy specialists, just to name a few exciting career opportunities. We also need their help in spreading the word about the need for nutritious food and remarkable diversity of production here in California. We lead the nation in fruits, nuts, vegetables and dairy. Our fellow Americans and people around the world depend on it.

So I want to thank Cal Poly and all of our great CSU and UC ag colleges for their dedication in preparing the next generation of farmers, ranchers and leaders. We’ll need them to carry-on California’s impressive history of innovation and adaptation. They’re getting a valuable head start with college course work and extracurricular activities like float construction for the greatest parade in the world. I can’t wait to see the final product!