Posted on December 18, 2015 by Office of Public Affairs 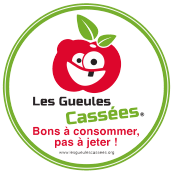 Of the various calls to action at the United Nations climate conference (last) week, that one by Nicolas Chabanne might be among the catchiest catchphrases.

Mr. Chabanne, an entrepreneur with ties to French fruit and vegetable farmers, has been working the sidelines of the conference to promote an effort that he says can help the climate by reducing food waste.

Tapping into a growing international movement to sell and consume food deemed too visually unappealing to make its way to market — whether undersize apples, pug-nose peppers or misshapen Camembert — Mr. Chabanne runs a campaign called Gueules Cassées, which translates into Ugly Mugs.

Its logo is a smiling apple with a black eye and a single tooth, which Mr. Chabanne prints on labels that farmers and retailers can affix to their homeliest produce and sell at reduced rates. He sells the labels for a few euro cents each, keeping part of the proceeds while donating the rest to consumer groups or activists fighting food waste.

The efficiencies in farming, packaging and transportation that could come from consuming such fruits and vegetables, instead of throwing them away, could eliminate one billion tons of carbon emissions a year, Mr. Chabanne contends, and save 210 million tons of food a year.The United Nations’ Food and Agriculture Organization has estimated that a third of the world’s food fit for human consumption each year does not reach consumers.

An estimated 800 farmers and food producers are participating in Ugly Mugs so far. “I am really cheerful when I can make the most of everything my orchards produce,” said Nicolas Benz, a cherry producer who has been involved with Ugly Mugs since Mr. Cabanne began it in April 2014. Mr. Benz said the program had enabled him to sell the 10 percent of his cherries he did not even pick before, as they were considered too small for the food industry.

Late last year Ugly Mugs reached an agreement with the French multinational supermarket chain Carrefour, which since April has sold about 85,000 Camembert cheeses with Ugly Mug labels. Carrefour plans to promote the efforts among all its suppliers next year.

Recently, the New York ­based investment fund Global Emerging Markets committed up to 6 million euros, or about $6.6 million, to expand the Ugly Mug program into developing countries. There are similar marketing efforts elsewhere. In San Francisco, a start­up called Imperfect Produce operates a home­ delivery service for what it describes as “cosmetically challenged’’ fruits and vegetables. In Portugal, the cooperative Fruta Feia, or Ugly Fruit, sells unphotogenic produce obtained directly from the growers. Worldwide, “these actions complement each other,” said Camelia Bucatariu, a technical officer on food waste at the United Nations’ Food and Agriculture Organization.

Mr. Chabanne grew up surrounded by the orchards, vineyards and rolling fields of Provence, in the south of France. Though not a farmer, he worked for a time for the Confrérie de la Fraise — the Strawberry Guild — which promotes high­ quality produce at a national level in France. But in early 2014 he set out on his own, starting Ugly Mugs with Renan Even, the president of a small fruit and vegetable distributor, selling fruits and vegetables. “One day, it clicked,” Mr. Chabanne recalled. “I had a friend selling the finest apricots you could imagine. And I watched him throw out fruit simply because of a small spot on their skin made by branches. The apricots were perfectly edible. He told me: ‘If I leave one of these in, the whole box will be discarded.’”