Climate Change in the Southern Hemisphere – Secretary Ross in Chile

Posted on November 28, 2017 by Karen Ross, Secretary, California Department of Food and Agriculture

Chile is a perfect climate analogue to California with its own central valley and an abundance of specialty crops. Like California, it relies on snow melt to irrigate crops, it produces world-famous wines, and it supports vibrant cities like Santiago, the capital. Chile has been identified by the Intergovernmental Panel on Climate Change as having seven of nine characteristics that are vulnerable to climate change, including increased temperatures, a reduction in rainfall, and crop relocation from north to south as increasing temperatures and changing rainfall alter current growing areas.

As we learn how Chile is adapting to climate change, we understand that the challenges they face are the same challenges we experience in California. Given how important agriculture is to Chile, they–like us–are serious about invasive pests. Upon arrival on Sunday, we saw dog teams inspecting luggage and familiar information about not “packing a pest” was clearly evident as we made our way through customs. 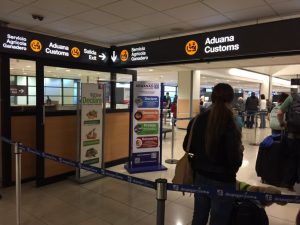 On Monday, the delegation visited with the U.S. Ambassador to Chile, Ms. Carol Perez. Ambassador Perez was well aware of the recent Napa/Sonoma fires as well as the drought conditions that California has experienced. Chile has similar climate change impacts, including an eight-year drought as well as its own fires fueled by strong winds that have devastated agricultural crops and towns. The country is home to several glaciers that are now melting due to a warmer climate.

The morning was completed by visiting the Ministry of Agriculture in Chile and hearing from a wide group of leaders and experts, including those in the UC Davis Chile program working to create a platform for collaborative research between university and  Chilean researchers to support life science innovation in both Chile and California.

Climate change is very real to the people of Chile and the government has worked to create climate change adaptation plans that are being implemented at the state, regional and local levels – elements like securing water resources, studying genetic resources such as plant varieties, controlling pests, and providing extensive information to growers. Like California, there are mitigation commitments in Chile for greenhouse gas emissions – the country is targeting a 30 percent  reduction from 2007 levels by 2030. 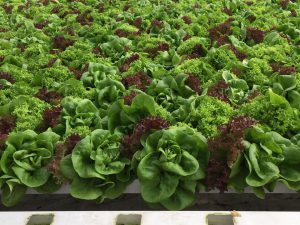 We have also learned about programs to make irrigation more efficient, including infrastructure plans to retain up-to 80 percent of the country’s snow melt; and we visited a hydroponic lettuce production operation in Quillota, which is in central Chile northwest of Santiago. The growers use a mostly automated system that produces fresh lettuce in 21 days and yields about 13 harvests per year compared to two or three in soil systems.

Our delegation looks forward to learning more about irrigation technologies and how they are adapting to climate change. Agriculture is eight percent of the Chilean GDP and a major contributor to their export markets. Close collaboration between Chile and California is key to assisting both regions adapt to climate change and continue to produce food that feeds the world.

Secretary Ross is in Chile this week for an exchange on climate change adaptation. Joining her in the delegation are representatives from the agricultural, academic and policy sectors.