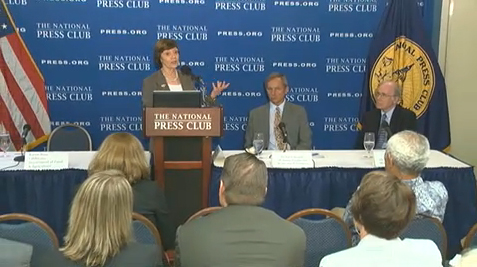 A new report from the University of California, Davis, shows that California agriculture is weathering its worst drought in decades due to groundwater reserves, but the nation’s produce basket may come up dry in the future if it continues to treat those reserves like an unlimited savings account.

The UC Davis Center for Watershed Sciences study, released today at a press briefing in Washington, D.C., updates estimates on the drought’s effects on Central Valley farm production, presents new data on the state’s coastal and southern farm areas, and forecasts the drought’s economic fallout through 2016. The study found that the drought — the third most severe on record — is responsible for the greatest water loss ever seen in California agriculture, with river water for Central Valley farms reduced by roughly one-third. Groundwater pumping is expected to replace most river water losses, with some areas more than doubling their pumping rate over the previous year, the study said. More than 80 percent of this replacement pumping occurs in the San Joaquin Valley and Tulare Basin.

The results highlight California agriculture’s economic resilience and vulnerabilities to drought and underscore the state’s reliance on groundwater to cope with droughts. “California’s agricultural economy overall is doing remarkably well, thanks mostly to groundwater reserves,” said Jay Lund, a co-author of the study and director of the university’s Center for Watershed Sciences. “But we expect substantial local and regional economic and employment impacts. We need to treat that groundwater well so it will be there for future droughts.” Other key findings of the drought’s effects in 2014:

If the drought continues for two more years, groundwater reserves will continue to be used to replace surface water losses, the study said. Pumping ability will slowly decrease, while costs and losses will slowly increase due to groundwater depletion. California is the only state without a framework for groundwater management.

“We have to do a better job of managing groundwater basins to secure the future of agriculture in California,” said Karen Ross, Secretary of the California Department of Food and Agriculture, which largely funded the UC Davis study. “That’s why we’ve developed the California Water Action Plan and a proposal for local, sustainable groundwater management.”

“A well-managed basin is used like a reserve bank account,” said Howitt, a professor emeritus of agricultural and resource economics. “We’re acting like the super rich who have so much money they don’t need to balance their checkbook.”

The analysis was done at the request of the California Department of Food and Agriculture, which co-funded the research with the University of California. The report’s other co-authors include UC Davis agricultural economists Josué Medellín-Azuara and Dan Sumner, and Duncan MacEwan of the ERA Economic consulting firm in Davis.

California produces nearly half of U.S.-grown fruits, nuts and vegetables and nearly a quarter of the nation’s milk and cream. Across the nation, consumers regularly buy several crops grown almost entirely in California, including tomatoes, carrots, broccoli, almonds, walnuts, grapes, olives and figs.