Posted on January 15, 2016 by Office of Public Affairs 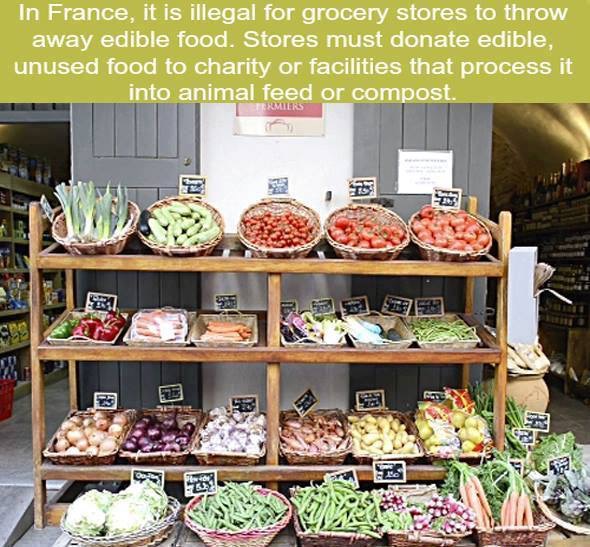 What happens to the apples no one buys at the grocery store?

You’ve been there: looking at apples (or other produce) and examining what’s in front of you before deciding on “the one.” The first apple you grabbed wasn’t ripe enough, and the second one had a weird shape. The third was too mushy. But that last one? It was perfect. Into the cart and on you go.

But what happens to the apples and the other food you didn’t buy — and no one else did either? Too often, that perfectly good, unsold food ends up in the trash.

That’ll soon be changing in France.

The country just passed a bipartisan bill that prohibits grocery stores from throwing out unsold food.

Instead of discarding food items that are approaching their sell-by date, French supermarkets will be required to donate the food to charities or to turn it into animal feed or compost.

On the heels of the Paris climate change agreement, France is hoping to find a solution that helps the hungry while also helping the environment.

Many families in the world struggle to find food to eat.France is said to throw away almost 8 million tons of food every year, and grocery stores are a big contributor. Between people being picky about the aesthetics of their food, overstocked shelves at the store, and sell-by dates that don’t actually mean that much, there is room to explore how to keep more food in tummies and less in the landfill.

The law, which passed on Dec. 10, 2015, will make it possible for charities to have access to more edible food, like crates of yogurts, that would otherwise be destroyed. It’ll target stores with retail space of over 4,300 square feet (so … big ones) and is expected to go into effect once the Senate votes on it in early 2016.

According to the United Nations, if wasted food became its own country, it would be the number-three contributor to greenhouse gas emissions in the entire world. That’s pretty wild when you think about it. Throwing away leftovers or seeing food in a grocery store’s dumpster doesn’t seem like that big of a deal until you see what it’s doing on a global scale.

The United States should take note. We waste enough food to fill a 90,000 seat football stadium every day.

Yes, just let your head wrap around that for a second.

We’re throwing away more than one-third of all the food that’s produced in the country every year. Consumers do play the biggest part in that food waste, but grocery stores are responsible for throwing away 10% of it. We’re using as many tricks as possible to reduce the waste, but there’s more that can be done.

One Response to France’s approach to reducing food waste