Posted on January 25, 2016 by Office of Public Affairs 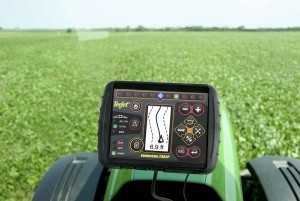 Though it’s just an hour south of California’s Silicon Valley, the Salinas Valley — better known for churning out lettuce and tomatoes than the world’s newest tech devices — might as well be a world away. In Silicon Valley, companies like Apple, Hewlett-Packard, Intel, and Google reign supreme. In Salinas, the biggest names are those of fruit and vegetable producers — Dole Foods, Chiquita, Driscoll Berries, Taylor Farms.

But the distance between the two places could soon seem a little smaller, thanks in part to a new effort on the part of the agriculture industry to attract technology companies to the Salinas Valley. Last month, the Western Growers Association — a trade association representing local and regional produce growers from California, Arizona, and Colorado — opened the Center for Innovation and Technology in Salinas, CA. The space — which has room for 34 startups to work, take classes, and meet with farmers — hopes to serve as a midway point between the innovative ideas of tech companies and the technical know-how of industry experts.

“Demand for food is increasing dramatically across the world because of increased population,” Tom Nassif, CEO of the Western Growers Association, told ThinkProgress. “You also have diminishing natural and human resources, and you’ve got to increase your production by 70 percent in 40 years to feed the world’s population. How do you do that?”

Nassif and the Western Grower’s Association are far from the first to suggest that technological innovations could help propel agriculture into the future, nor is this the first time in history that agriculture and technology have entered into a close relationship. In the 1960s, scientists like Paul R. Ehrlich — Stanford professor and author of the best-selling Population Bomb — issued grave warnings of impending mass starvation due to population growth. Instead, thanks to a slew of technological innovations in crop breeding, the world was able to significantly increase the amount of yield per acre for key crops like maize, wheat, and rice. Dubbed the Green Revolution, technological advances helped double the yields of rice and wheat across Asia, sustaining a population that grew over the same period of time by 60 percent. Though not without controversy — especially with regard to the rapid adoption of chemicals in agriculture — over the course of a few decades, the Green Revolution succeeded in steering the world away from earlier predictions of global starvation.

But those predictions have begun to resurface in recent years, stirred by the potential for climate change to disrupt agricultural systems at a time when the world’s population continues to grow.According to the United Nations, the world will need to feed more than 9 billion people by 2050, meaning that food production will need to increase by 70 percent. That creates a huge potential for new technologies that can either boost agricultural production, efficiency, or both.

“All indications are that this is the new industry for investment in high tech,” Nassif said. “We’ve only been open a month, and we already have a number of tenants, more coming in every day, and more people indicating a desire to sponsor the venture as well as invest in agricultural technology.”

Created as California looks to leave behind the historic drought that has plagued the state for the past four years, the Center for Innovation and Technology is especially interested in technology to help farmers maintain crop yields in the face of diminishing access to water.

“Obviously using less water and using less labor are our highest priorities,” Nassif said, citing technology like drones that can map where exactly on a field water is needed most, or technology that can help a crop retain more water in its roots, as examples of the kinds of innovation he hopes to see come from the center.

Jeffrey Orrey, president and CEO of GeoVisual Analytics — one of six start-ups working out of the Center right now — is already engaged in creating technology that would help farmers use drones, as well as smaller manned aircrafts, to create high resolution images of their fields — technology similar to work that he used to do for NASA. By giving farmers a way to better monitor how their crops are grown, Orrey says, farmers are able to use inputs — like water, or fertilizer — as efficiently as possible on their land.

“Over time, with resource shortages and increasingly severe changes in weather and climate, it’s going to become imperative that we are more quantitative and better at monitoring how crops are grown to better understand how to respond to these drastic changes,” Orrey told ThinkProgress.

Giving farmers better access to quantitative data in the field also has co-benefits for the environment — the more real-time information a farmer has about their field, the more precise they can be with their application of things like pesticide, fertilizer, and water. That could help reduce the amount of excess fertilizer that ends up degrading water quality as runoff, the amount of water used throughout an operation, or the amount of pesticide needed to treat a field.

Orrey was drawn to the Center, he said, because it allowed his company a chance to interact directly with farmers and industry — a piece of the puzzle that can be missing for some entrepreneurs hoping to create new technology for agriculture.

“Unless you come from a farming background, we saw that there was a disconnect between high tech companies that think they have solutions but really don’t appreciate the nuance of making them applicable to the farm,” he said. “[The Center creates] the opportunity to bring the tech together with people who are doing farming and know the complexity.”

Nassif said that the Center’s location — close to the farmers of the Salinas Valley and within driving distance of both Silicon Valley and San Francisco — makes it an ideal first location, but he hopes that more Innovation and Technology Centers will open throughout the state in the near future.

“I think we’ll outgrow the Center very quickly, and that’s a good thing,” he said. “I think that given the appropriate attention and investment, the Center has nowhere to go but up, and to attract more and more innovators through employment and high tech jobs in agriculture.”