Posted on January 26, 2016 by Office of Public Affairs 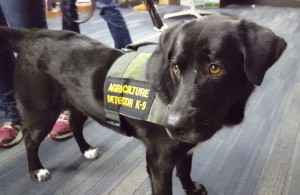 Animals have been known to be able to use their senses to detect things that humans require extensive technology to detect. Mary Palm, USDA Animal and Plant Health Inspection Service (APHIS) national coordinator for citrus pest programs, said dogs have been successfully trained to detect canker disease, and now Huanglongbing disease (HLB), in citrus.

“Over the past four to five years,” Palm said, “a researcher in Florida first determined dogs could actually detect canker, began training dogs,” Palm said, “and then trained different sets of dogs to detect it. It turned out that they were very good at it. In a demonstration there, none of the people could find any symptoms in a particular citrus tree, but the dogs came through and found the symptoms. Once the people came back and looked very closely, sure enough, it was there.”

Palm said the USDA Huanglongbing Multi Agency Coordination (MAC) Group funded research to determine if dogs could detect HLB in citrus as well as they detected canker. There are now five dogs being trained and tested daily. If grower demand increases, the use of canines in pest management could increase.

Palm said they will probably come up in the next year or two with certification criteria for other companies to train dogs and certify them as detectors. Palm said, “They would be able to get a certificate to show they had conducted all of the tests necessary with the [proper] degree of accuracy.” Palm said the dogs in this program have a 99 percent success rate at detecting HLB disease.

Palm said approximately 80 trees are put inside every night, the positive ones in one greenhouse and the negative ones in another. The trees are taken out the next day and positioned in different patterns for dogs to inspect throughout the day. When the dogs are brought out, even their trainers don’t know which trees are positive or negative. The trained dogs are more than 99 percent accurate.”