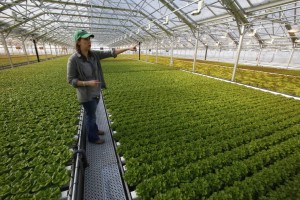 A rooftop greenhouse in Chicago – from the Wall Street Journal

A crop of startups have emerged in recent years to grow vegetables on city rooftops or turn old factories into indoor farms. But their quest for locally grown lettuce is running into challenging business realities.

BrightFarms Inc. last year pulled the plug on a planned greenhouse in Washington, D.C., 10 months into the process of getting permits, and earlier exited an effort to develop a rooftop farm in Brooklyn, New York. FarmedHere LLC, which operates a farm in a former box factory outside Chicago, shut down for six months last August to revamp its strategy.

Building farms on city rooftops is “a foolish endeavor” because of the higher costs and the additional time for permitting, said Paul Lightfoot, chief executive of BrightFarms. The firm, which has raised more than $25 million in equity and more than $15 million in project finance, is now focusing on greenhouse farms in locations outside of urban centers.

“You would scale very slowly, and waste investors’ money,” Mr. Lightfoot said of city projects. The cost for the Washington, D.C., facility would have been nearly 20% more than an $8.5 million greenhouse it instead built in suburban Virginia, he added.

Venture-backed for-profit farming startups have sought to reshape agriculture by growing crops such as salad greens and herbs in or near big cities. The idea is that urban farms promise year-round supplies of greens, with less spoilage and lower transportation costs than soil-raised produce from California or Mexico.

The undertaking is a far cry from the community gardens on once-vacant lots that are typically associated with urban farming. Gotham Greens Farms LLC, which has raised about $30 million, said it currently sells more than 20 million heads of lettuce and leafy greens a year to restaurants, food-service companies and retailers such as Whole Foods Market Inc.

The company, started in 2009, operates four rooftop greenhouses, including a Queens, N.Y., facility that once housed Ideal Toy Co., a maker of teddy bears and Rubik’s Cubes.

High-tech indoor farming can involve millions of dollars in investments and a sophisticated mix of crop science, fertilizer know-how as well as expensive lighting and sensor systems to monitor temperature, moisture and other conditions.

“This is very much a technology play,” said David Rosenberg, chief executive of Newark, N.J.-based AeroFarms LLC, which currently operates one indoor commercial farm as well as a research and development farm and a farm in a local school.

AeroFarms said it has raised over $70 million in corporate and project financing. The company isn’t profitable but says it expects each of its farms to become cash-flow positive in its first year.

FarmedHere, which restarted its business in February, abandoned an aquaponic model that relied on a tilapia farm to generate fertilizer to grow lettuce, basil and other greens. Now the company, which has raised about $13 million, uses plant-derived organic fertilizers.

Aquaponics “sounds pretty elegant,” said Nate Laurell, who recently took over as CEO. But “it’s a much simpler process to use organic nutrients than to manage a school of fish and all that biology and chemistry.” He said the change will also reduce the total cost of raising crops by 30%.

Most startups grow lettuce and herbs that have short growing cycles and thrive in controlled environments. Brooklyn-based Edenworks says it can produce many varieties of baby lettuce in its indoor farm in just 18 to 21 days compared with 28 to 35 days for field-grown products.

“We are getting better unit economics than a farmer farming 1,000 acres in Salinas, Calif.,” said Edenworks CEO Jason Green, noting that a shorter growing cycle and a 12-month operation allows the startup to turn over its crop more often than soil-based farms. By locating close to purchasers, the company cuts transportation and warehouse costs, he added.

Still, the economics are challenging. In a second facility, not yet under construction, Edenworks plans to cut labor costs by more than 50% by automating seeding, harvesting, washing, drying, packaging and labeling. “The numbers would not work out if we didn’t do that,” Mr. Green said.

Flavor is also tricky. Industry participants disagree about what combination of lighting, fertilizer and growing methods produces the tastiest greens at the lowest cost. Some startups operate greenhouses, while others stack trays of plants in so-called vertical farms that rely on lighting systems instead of sunlight.

“It is more difficult for hydroponic growers to achieve the same taste as soil-grown products or herbs,” said Elly Truesdell, a buyer for Whole Foods, which buys produce from several high-tech farmers. In hydroponic farming, plants are grown in nutrient-rich water.

In New York, Whole Foods typically sells a 5-ounce package of Gotham Greens lettuce for $3.99, about the same price as a slightly larger package of store-brand organic greens grown in California and $1 more than a head of soil-grown organic romaine lettuce.

Gotham Greens CEO Viraj Puri said the company had to experiment with dozens of varieties of kale before settling on one that would thrive in its greenhouses without turning bitter and struggled to find a variety of green leaf lettuce that wouldn’t “bolt,” or shoot up and take on a sharp taste, just before harvesting.

“Plants are not widgets,” said Mr. Puri. “There are a lot of dependent variables.”

This entry was posted in Agricultural Marketing and tagged indoor farming, urban farming. Bookmark the permalink.