Posted on June 1, 2016 by Office of Public Affairs 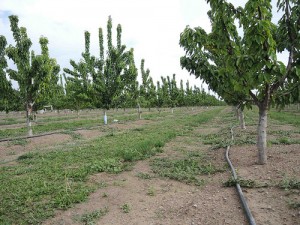 Despite hopes for a drenching from El Niño, California farmers are facing another drought year in 2016.  Even after four years of the worst drought on record, California farm output was a record $54 billion in 2015, accounting for more than half of the nation’s fresh produce. Groundwater has helped compensate for California’s lack of rainfall, but groundwater overdraft cannot be continued indefinitely.

California farmers have responded to the drought by fallowing land; switching to crops that yield higher value per unit of water; and switching irrigation technologies.  Almost all California cropland is irrigated, so continued improvements in irrigation efficiency are key to weathering this and future droughts.

There are four main types of irrigation: surface (flood and furrow); sprinkler; drip (including low-volume micro-sprinkler); and subsurface.  Surface methods generally lose the most water to evaporation, and have been declining in popularity for several decades as efficient drip systems take their place.  The drought provides more urgency for this transition, and farmers interested in switching technologies can take advantage of grants from SWEEP, the state’s State Water Efficiency Enhancement Program.

However, even when using a high-efficiency system, a farmer needs to know how much water to apply in order to accurately meet crop demand.  A large percentage of California farmers make irrigation decisions based on CIMIS, the (California Irrigation Management Information System).  CIMIS uses about 200 weather stations around the state to calculate “reference evapotranspiration”: water lost from a well-watered grass field under current local conditions. Farmers then multiply this number by a “crop coefficient” for a rough estimate of their actual water demand.

Even better is to measure the actual evapotranspiration in an individual farm field – but, until recently, that required equipment that was too costly for most producers.  A new, cheaper sensor technology called surface renewal, developed jointly by ARS and UC Davis, performs real-time evapotranspiration measurements on the spot.  Results so far from California fields show that surface renewal can provide a more detailed and accurate picture of crop water demand – potentially saving much-needed water for other uses.

It is unknown when California’s current drought will end, and climate change will likely increase the risk of severe droughts in the future.  Efficient irrigation technologies will become ever more important to help California maintain its role as the nation’s number one agricultural producer.