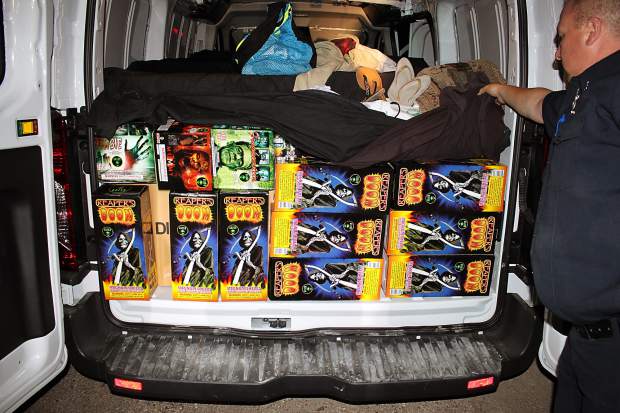 If you’ve been wondering why westbound lanes of Interstate 80 have seemed overly backed up near Truckee’s agricultural inspection station the past several days, it’s due to increased enforcement from state officials looking for illegal fireworks.

Earlier this month, CalFire led a multi-agency fireworks seizure operation across several days at the California Border Protection Station in Truckee, often referred to as the “bug station,” which wrapped this past weekend.

In all, more than 1,882 pounds of fireworks were confiscated, CalFire spokesman Daniel Berlant said Tuesday, resulting in 20 misdemeanor citations and seven felony arrests.

A similar operation in San Bernardino County (Yermo station, I-15) resulted in 25,406 pounds of illegal fireworks, along with 51 misdemeanor citations and two felony arrests. 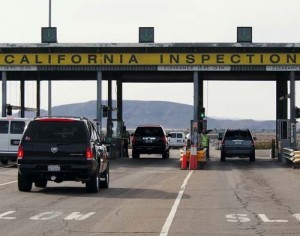 CDFA’s Border Inspection Station along I-15 at Yermo in San Bernardino County.

“Wildfire activity has significantly increased during the last several weeks, and California continues to experience explosive fire conditions as a result of five years of drought,” Chief Ken Pimott, CalFire’s director, said in a statement. “Everyone needs to understand the dangers associated with the use of illegal fireworks or misuse of legal fireworks.

“Any person who starts a fire from fireworks — even accidentally — can be held liable for the fire-fighting costs as well as property damage costs.”

The Truckee bug station is part of a network of 16 along the state’s eastern and northern borders, said Jay Van Rein, a spokesman for the California Department of Food and Agriculture, which operates the stations.

An average of 35 million vehicles enter the state each year through these stations; about two-thirds are private vehicles and the remainder are commercial. Vehicle traffic through the Truckee station is roughly 4.8 million per year.

Typically, the Truckee station, which operates year-round, is staffed with 26 to 30 employees during the year, Van Rein said, with 30 being the max for the summer season. For the most part, staff in Truckee and across the state inspects vehicles for illegal plants and pests.

In 2015, for example, Van Rein said the 16 stations intercepted 22,594 shipments of prohibited plants (including plant material such as soil, roots, leaves and cuttings) and 5,793 pests.

“The most common interceptions include fruits and vegetables, fruit trees, garden plants, household plants and firewood,” Van Rein said. “Beehives shipped into the state to pollinate crops are also inspected to make sure ants and other pests aren’t hitchhiking.”

In addition to inspecting for agricultural pests, the stations serve as “a convenient platform for other agencies,” Van Rein said, such as the California Department of Fish and Wildlife to inspect watercraft for invasive species, or CalRecycle to prevent fraud in the state’s beverage container recycling program.

Over the past several days, the CalFire-led fireworks checks involved inspecting vehicles traveling through from Nevada, with officials at times asking drivers to step out of their vehicles and to open doors for officials to take a closer look inside.

Officials this week reminded motorists that the inspections are indeed voluntary, and that authorities are not conducting illegal searches.

“Although submitting to inspection is voluntary, vehicles and commodities are not allowed to enter until released by an inspector,” Van Rein said. “A driver seeking to deny/avoid inspection of a vehicle would have the option to turn around and not have the vehicle enter the state.”

Berlant reiterated that point on Tuesday, saying that all laws were followed during the fireworks operations, when both seeking to inspect and when — for those who gave consent — searching vehicles.