Apps for Ag Hackathon winners announced – from the University of California 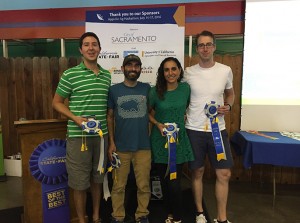 The group “GivingGarden,” winner of first-prize at the Apps for Ag Hackathon earlier this week. From left, Scott Kirkland, Josh Livni, Deema Tamimi and John Knoll.

A gardening and produce-sharing app took top prize in the Apps for Ag Hackathon, after contestants pitched judges at the California State Fair in Sacramento on July 17. The first place team, GivingGarden, took home $7,500 in prize money, custom rodeo belt buckles, and a membership to the AgStart Incubator in Woodland.

The hyper-local, produce-sharing app provides gardening advice from the UC Master Gardener Program and enables backyard gardeners to connect with others who want to share their produce. The GivingGarden team members are Scott Kirkland, Josh Livni, Deema Tamimi and John Knoll.

Compostable, which finished in fourth place, is an app and “Internet of Things” (IoT) device that diverts food waste from landfills and turns it into fertilizer and fuel so that it can be used on a farm. Sohail Han, Nathan Azevedo, Brandon Jack, Regan King and Raheela Khan make up the Compostable team.

All of the participating teams had about 48 hours to develop their apps. Teams that were interested were offered $500 in “cloud credits” to build their solutions and host them on Amazon Web Services’ platform. Teams also had access to an IoT kit to incorporate connected devices into their solution.

The Apps for Ag Hackathon, which was sponsored by UC Agriculture and Natural Resources, the California State Fair and the city of Sacramento, brought together software developers, designers, entrepreneurs, farmers and others who work in agriculture.