Posted on August 8, 2016 by Office of Public Affairs

The California wine and winegrape sector and allied businesses deliver a total economic contribution of $57.6 billion annually to the state’s economy and $114.1 billion annually to the U.S. economy according to a new report commissioned by Wine Institute and the California Association of Winegrape Growers. California wineries and vineyards also directly and indirectly generate 325,000 jobs in California and 786,000 jobs across the nation. The report, “The Economic Impact of California Wine and Grapes 2015” prepared by John Dunham & Associates of New York, was presented at a Joint Informational Hearing of the California Assembly Committee on Agriculture and Assembly Select Committee on Wine held at UC Davis. 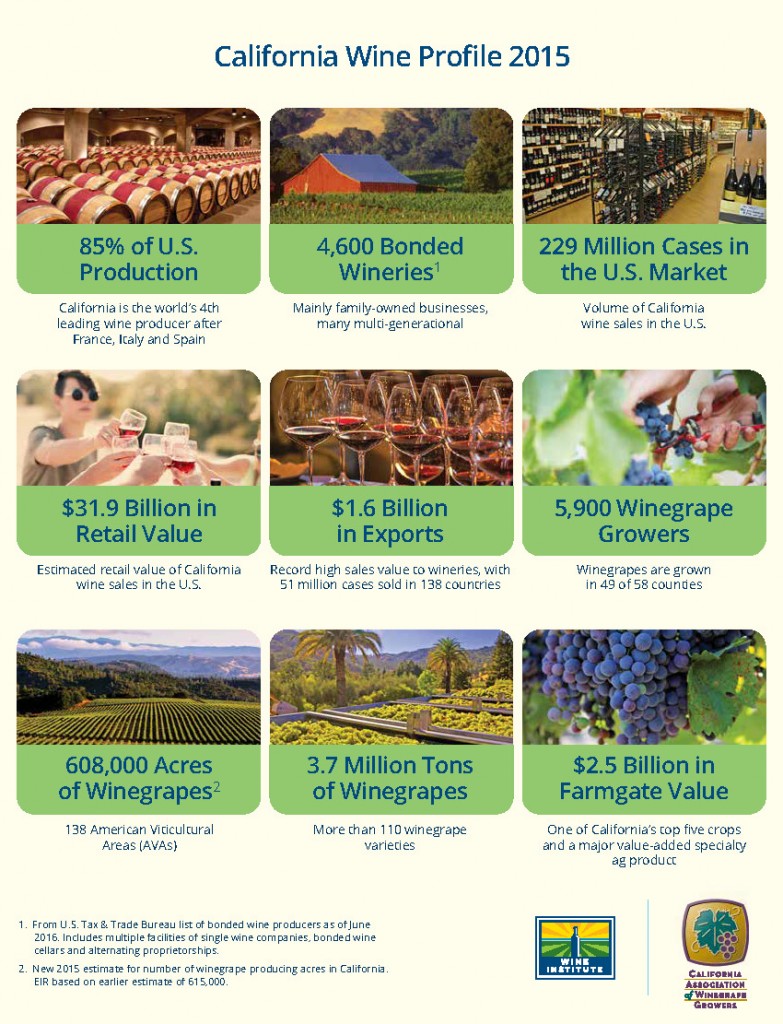 The report shows growth of 17% in statewide impact (from $49.2 to $57.6 billion) and 19% in national impact (from $96.0 to $114.1 billion) in the past seven years. This strong growth during a period that started with the Great Recession and continued with slow recovery shows the strength and resiliency of the nation’s number one wine-producing state as a positive economic force across the nation. John Dunham & Associates used new methodology for the 2015 report and has also adjusted the 2008 economic impact numbers so that the comparison in growth would be comparable.

“California wine is an economic engine for our nation. Our predominantly small, family-owned businesses create jobs, pay significant taxes, and give back generously to charities and communities,” said Wine Institute President and CEO Robert P. (Bobby) Koch. “These are significant accomplishments when the strong dollar and pressure from imports make the U.S. the most competitive wine market in the world, and we continue to face the threat of increased taxes and regulation at every level of government.”

“Vineyards and wineries are iconic images of the California landscape, but today’s report reminds us that wine and winegrapes are also integral to a vibrant state economy,” said California Association of Winegrape Growers President John Aguirre. “The scenic views and tasting rooms found in wine country attracted nearly 24 million tourist visits in 2015, and the commitment of California growers and vintners to sustainable practices forms a foundation that supports 325,000 jobs while also promoting important social and environmental benefits.”

The report measures the full economic impact of the wine and grape industries in terms of employment, wages, taxes, tourism spending and visits, and charitable giving. It uses a standard and widely used methodology which includes direct, indirect and induced economic impact in order to present the full picture. The IMPLAN model, developed by the U.S. Forest Service and University of Minnesota, is used by many companies around the world as well as government agencies such as the National Agricultural Statistics Service, Economic Research Service and Federal Reserve Bank. For a copy of the methodology, click here.

Impact of California wine and winegrapes on the U.S. economy in 2015:

Impact of California wine and winegrapes on the California economy in 2015: