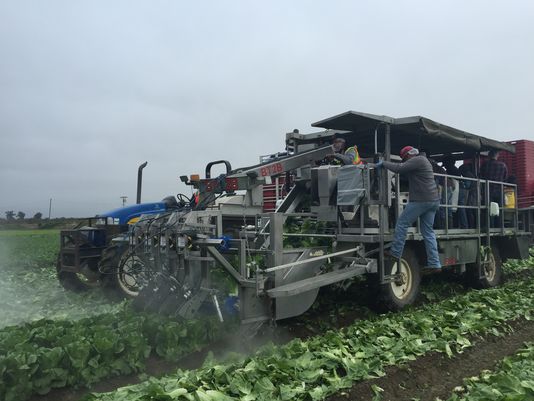 Automated technology at Taylor Farms in the Salinas Valley

Israel Ramirez considers himself an anomaly, at least for now. At 21 he is one of the youngest farm workers in an industry that known for its aging workforce.

But as agriculture companies find ways to introduce new technologies, younger workers such as Ramirez are increasingly attracted to the work.

Field workers are critical to an industry that is a key economic driver in this region. In Salinas Valley the agriculture business is estimated at $9 billion, and includes produce giants Taylor Farms, Driscoll’s and Church Brothers.

Taylor Farms has an estimated 1,500 field workers – many of them contracted – and on any day 67 crews in the fields.

The average worker’s age is 48 with the majority ranging from 48 to 75, said Albert Garnica, Taylor Farms’ vice president harvest operations who supervises the fields.

Over the past decade the company like many in the industry has faced an ongoing labor shortage, caused by an aging workforce, a growing demand for salad and cut vegetables, a tighter regulatory environment when in California and the increased costs of doing business.

Industry players say the industry is often overshadowed by the attraction of working in industries such as tourism or construction.

“Mom and dad want their kids to do something better than what they did,” said Paul Muthart, a grower at Pasquinelli Produce Co. in Yuma, Arizona, which has been challenging with finding younger workers as their workforce ages. “Heck even changing beds in Vegas is better than working out in the heat and the mud…Again it comes down to the glamour of what we do.”

The shortage has been so severe that the industry has been bringing in workers on H2A visas, a temporary work visa for foreign farm workers. Garnica said roughly 40% of field workers in Salinas Valley are on H2A visas.

Muthart said 60% of their field workers are over 50 and a fifth of their work force is over 60. The company works hard to retain older workers in part because it is harder to find replacements, especially younger workers.

“I can confirm that our population is for sure aging and it’s a concern to us,” he said. “Frankly I don’t know what we will do to attract young people into the work we do.”  Muthart said he believes the challenge in recruiting goes beyond the money. At Pasquinelli, a 9,000 acre farm in Yuma that grows cauliflower and celery, workers are entitled to pension, healthcare and $2 more than Arizona’s $8.05 an hour minimum wage. He said negatives are the work is seasonal and often requires relocating.

New technologies, new generation
Taylor Farms’ response to the labor shortage has been to step up its harvesting technology. The goal is to reduce costs, increase efficiency and woo younger workers, said Chris Rotticci, Director of Automated Harvest Equipment at Taylor Farms.

Five years ago it introduced two automated romaine lettuce machines, which resembles a factory on a truck. The machine cuts lettuce with high-pressured water jets eliminating a need for machetes. The truck processes the lettuce, which is reviewed by inspection crew.

The upshot is that it reduces the crew and maintains productivity. One machine cuts 10,000 pounds of lettuce an hour.  Within the past year, the company also released an automated cabbage cutter and celery cutter.

Rotticci said a broccoli cutter and additional lettuce cutters are in the pipeline.

The strategy is working he said. Over the past three years Taylor has seen a growing number of younger workers in their 20s and 30s, specifically for its automated machine crews.

Rotticci said younger workers and technology have grown in tandem.

“They are perfectly aligned together…we want to create higher skilled and more ergonomically-centered jobs,” he said. “We can create a higher skilled job where higher wages are available, we are seeing that younger generation work in the fields,” said Rotticci. “The attraction of the automatic harvesters are targeting a better work environment…These are not the bending over back-breaking job.”

Ramirez said the pay and the automated machines are what drew him to the industry. Ramirez, whose uncle is Garnica, worked for Taylor for a year and now works as a contractor, including on Taylor’s automated romaine lettuce cutter.

“It’s hard work but good money,” said Ramirez, who splits his time between Salinas and Yuma where his wife and new baby live. Ramirez said while the base pay is $12.50 an hour, there are opportunities to receive overtime after a standard 10-hour shift. There are often pay increases and incentive bonuses too.

During a productive week, the weekly paycheck is $600 sometimes $800.
Ramirez said it can be an ideal summer job for college kids.

The automated machines make a positive difference, he said.

“Of course it is a good thing,” said Ramirez, including for older workers. “We do have some older people with us and some of them can’t lift anything heavy. They are just grabbing the lettuce from the back.”

The downside is that the shift, some starting as early as 2 a.m., can be exhausting. Other drawbacks are the work is seasonal and requires travel. Ramirez said he is considering moving his family to Salinas so they can be together.

Ramirez said: “One time I asked a supervisor who said they like younger people because they are the new generation … There’s a new generation that will keep the company going.”

Ramirez isn’t alone. Denise Garcia, 22, has been working in the industry for five years. The Salinas resident is a contract worker for Taylor Farms and is part of the automated romaine lettuce cutter inspection crew.

Garcia, who previously worked in retail, said she was attracted by the pay – a base rate of $12.50 an hour.

“It pays kind of good and the water jets (automated lettuce cutter) are much better,” she said. That said, a source at a Salinas-based agriculture company who did not want his name published to maintain privacy, said it was harder to retain younger workers.

The source said, “it is harder to keep the younger people they just don’t have the work ethic anymore,” and young people were less tolerant of physically “strenuous conditions.”

Rotticci said he sees the opposite.

“These new kids went through school system and are realizing working in fields can be a profitable lifestyle. They are looking at higher skilled jobs,” said Rotticci. “We are seeing that draw come back. I don’t want to say it is easier work but it is definitely a shift in skillset.”

That said, Rotticci said Taylor Farms values all of its workers and is just looking to retain good workers.

“People can work forever as long as they want to and are productive,” he said.