Posted on September 2, 2016 by Office of Public Affairs 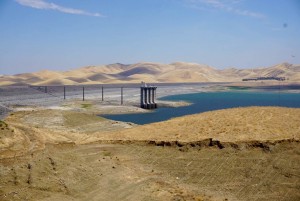 On August 15, a team from UC Davis, ERA Economics and the UC Agricultural Issues Center released an economic impact report related to the California drought of 2016.

Several commentaries have indicated that land fallowing in the summer of 2016 exceeds the approximately 80 thousand acres in the 2016 drought report. Therefore, this short “supplement” provides additional details and clarification on how we estimated the impact of the 2016 drought on land idling as opposed to other causes of water shortages in 2016. (The same clarification applies to jobs and other economic aggregates.)

The main point is that our estimates specifically and solely relate to what was caused by the lack of normal precipitation and other climatic events in 2016, building on conditions as we entered the 2016 production season. Crop rotation needs, market conditions, regulatory cutbacks to protect fish and habitat all affect land idling in addition to impacts of water scarcity due to drought.

Our methodology to determine how much land was idled due to the 2016 drought included surveys, modeling, and assessment of crop-by-crop planting data. Surveys of water districts in the Central Valley have provided, for the past three years, information on planting time water supply expectations for surface water allocations and access to groundwater. Remotely sensed data has helped us understand farm and district adaptation to drought.

Drought related water shortage
Central Valley Project contractors west of the Tulare Lake Basin were estimated to receive 5 percent of contracted allocations of surface water. Friant division contractors on the east side in the San Joaquin Valley were allocated 75 percent of Class 1 supply. The State Water Project contractors were slated to receive 60 percent of their contracted allocations. The net water supply losses in the Central Valley of nearly 680 thousand acre-feet results in a projected fallowing of 77 thousand acres. (Note that crop shifts and stress irrigation also reduce applied water). These acres are concentrated in the Tulare Lake Basin. The drought in 2016 implied minor losses of acreage in the Sacramento and San Joaquin River Basins, north of Tulare Lake and an additional 2,000 acres were lost in the Central Coast.

Crop reports from USDA for principle crops (mainly forage crops, grains, oilseeds and cotton) indicate a substantial recovery in 2016 relative to 2015. But 2016 acreage for these crops remains below 2011 by about one million acres. Table G-1 in the drought report appendix G provides a breakdown by crop. Rice is back to nearly normal conditions with just above 550,000 acres. In contrast, corn is down by about 140,000 acres, winter wheat is down by about 190,000 acres and cotton is down by about 170,000 acres from pre-drought plantings in 2012. It is worth noting that some grain crops are non-irrigated and that that there is some double cropping, especially for small grain and silage corn. That means that the sum of these acreages of individual crops is larger than irrigated acres planted for principle crops for the year. Low prices of these commodities bundled with lack of water explains much of the reduction in crop area.

Recently, NASA-Ames presented their estimates for summer idle land for June 1, 2016 through July 31st, 2016. They find idled acres in summer 2016 are higher than summer 2011 by about 470,000 acres in the Central Valley. As the season progresses, the measured idle acreage is anticipated to decline slightly through the end of September as new orchards and other emerging irrigated areas develop canopies that can be detected by NASA and USGS satellites. Based on patterns observed in previous years, this reduction is likely to be on the order of 100,000 acres by September 30, 2016. Areas that show the largest differences between 2011 and 2016 in idle land are located in the Tulare Lake Basin..

While conducting surveys of irrigation districts, many among the Sacramento Valley settlement and service contractors expressed concerns on potential curtailments due to temperature controls for fish protection, particularly spawning. These controls have likely caused additional summer fallowing due to difficulties in diverting water from the Sacramento River. Regulatory concerns about water quality due to debris from recent fires have also challenged water supply management in the eastern San Joaquin Valley.

Pumping restrictions in the Delta to prevent reverse flows and operations of the San Luis Reservoir have also affected quantity and timing of water to agricultural users south of the Delta. The combination of these effects contributed to the additional fallowing on top of drought-related fallowing. Thus a number of regulatory issues not directly related to the drought of 2016 have contributed to idled land observed in the Central Valley in 2016.

Final Remarks
Our drought report for 2016 attempted to highlight economic consequences caused by the weather conditions in 2016. For accurate drought analysis and state level policy, it’s vital to separate lands idled due to 2016 weather from those lands idled for other reasons. We recognize that significant land idling occurs even without drought conditions, but that was not the subject of our drought report. It is important to highlight that we did not attempt to quantify the amount of land idled that can be attributed to government regulations or agency decisions that relate to the broad long-term water and environmental conditions in California. Analysis of models and data to develop such estimates is an important topic, but that was not the purpose of our 2016 drought report.