Should the food industry sneak vegetables into food? From the New York Times

Posted on November 2, 2016 by Office of Public Affairs 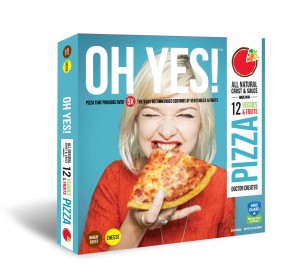 Puréed spinach in brownies. “Red velvet” pancakes made from beets. Oatmeal cookies with cauliflower bits. There are hundreds of creative ways to sneak fruits and vegetables past the wrinkled noses of even the pickiest children.

Whether you think this sort of culinary subterfuge is a great idea or a troubling violation of a child’s trust, it’s understandable that some parents do it. According to the Centers for Disease Control and Prevention, nine out of 10 American kids aren’t eating enough vegetables, and six out of 10 don’t get enough fruit.

But what happens when the food industry does the food sneaking for us?

A California company, Oh Yes Foods, is betting that parents will embrace pizza that’s loaded up with hidden fruits and vegetables. (Pizza is the second highest source of calories in our kids’ diets) The product is available in some Western states at Whole Foods and Target.

Amy Goldsmith, the chief executive of Oh Yes, said two of the company’s founders, both medical doctors, struggled for years with their picky daughter. “They tried everything to get her to eat healthy food but she just wouldn’t do it,” she says. “It was all about hot dogs and cheese pizza.” In desperation, they dried fruits and vegetables in an old food dehydrator they had, then used their coffee grinder to powder the produce and slip it into their daughter’s pizza crust and sauce.

Oh Yes isn’t the only company getting sneaky with produce. New York-based Kidfresh offers tot-friendly frozen entrees and snacks, such as macaroni and cheese and pepperoni pizza bites, all with a dose of puréed vegetables — in some cases enough to meet one-third of a young child’s daily requirement. “No more battles or headaches at mealtime with your little ones,” Kidfresh promises, “because we bring a fresh twist to vegetables: It is as if they were not there.”

For beleaguered parents of picky kids, that sort of pitch can be a siren song. Even parents whose children happily accept fruits and vegetables might still welcome these products, which claim nutritional superiority over traditional versions. And the market seems to confirm there’s a growing demand for produce-doctored foods for kids: Kidfresh has seen 50 to 60 percent growth annually and recently received an infusion of outside capital to further expand.

This isn’t the first time a food company has tried to sneak produce into kids’ food. In 2013, for example, the Girl Scouts of America offered a Mango Creme cookie that contained a proprietary fruit powder called NutriFusion. Although it was similar to any white flour cookie, with 11 grams of sugar per serving, the Girl Scouts marketed it as containing “all the nutrient benefits of eating cranberries, pomegranates, oranges, grapes, and strawberries.” Critics said the nutrition claims were misleading, and the cookie quickly disappeared.

Popular cookbooks, including Jessica Seinfeld’s “Deceptively Delicious” and “The Sneaky Chef” by Missy Chase Lapine both advise home cooks to secretly slippuréed vegetables into kid foods like macaroni and cheese or brownies.

Sally Kuzemchak, a registered dietitian and blogger at Real Mom Nutrition, is concerned about the mixed messages adults send when they hide vegetables in food. “It’s like telling kids, ‘This pizza is unhealthy, but this pizza is healthy because it has ground-up veggies in the sauce.’” And by hiding produce in another food, she adds, “there’s an implication that eating fruits and vegetables is a chore to be avoided or worked around, and I find it particularly troublesome when we’re giving that message to kids.”

Another question is whether hidden fruits and vegetables, particularly when reduced to powder form, can be regarded as the equivalent of fresh. Ms. Kuzemchak says they might be, “in a sort of George Jetson way.” But she pointed out that one of the valuable things you’re missing with dehydrated fruits or vegetables is the water. Water “is part of what makes these typically low-calorie, nutrient-rich foods so filling. That’s one reason why they’re an important part of the diet.”

Dr. David Ludwig, an obesity specialist at Children’s Hospital Boston and author of the new book “Always Hungry?”, is also troubled by what he sees as such products’ undeserved “health halo.”

“To fully understand the problems with processed foods,” he says, “we need to think beyond simply nutrients and calories.”

He notes that a 12-ounce Coke has about the same calories and sugar as two apples. “But you can’t make them equally healthy by adding a serving of Metamucil and a sprinkle of vitamins to the Coke,” he says.

In the case of pizza — and all the other highly processed foods that line our grocery shelves – Dr. Ludwig says there’s generally too little fiber to slow our digestion, resulting in a surge and later crash in blood sugar which causes many people to overeat.

Mr. Cohen, a native of France, says he’s been surprised by the degree to which America’s food culture fails to encourage kids to eat healthfully. He hopes Kidfresh products can bridge the gap: “We’re just here to provide help and support to parents by incorporating vegetables into the products kids already like to eat.”

But Dr. Ludwig and Ms. Kuzemchak caution that by relying exclusively on fortified pizza or pasta entrees to conveniently check off their child’s “fruit and vegetable” box, parents aren’t teaching their children to like vegetables. They’re simply teaching them to eat more pizza and pasta.

“When my kids are off to college and beyond,” says Ms. Kuzemchak, “will they be puréeing cauliflower and squash and putting it into their mac and cheese? No. But I hope they enjoy the flavors and textures of those veggies enough that they would eat them on their own.”