What’s organic? A debate over soil may come down to turf – from the New York Times

Posted on November 17, 2016 by Office of Public Affairs 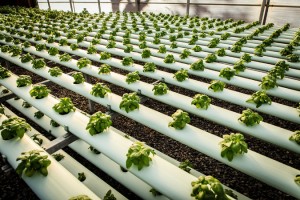 Basil growing in a hydroponic greenhouse.

If a fruit or vegetable isn’t grown in dirt, can it be organic?

That is the question roiling the world of organic farming, and the answer could redefine what it means to farm organically.

At issue is whether produce that relies solely on irrigation to deliver nutrients to plants — through what is known as hydroponic and aquaponic systems — can be certified organic. And the National Organic Standards Board, an advisory group that makes recommendations to the federal secretary of agriculture, will get an earful on the topic at its meeting in St. Louis this week.

On one side are the growing number of big and small growers raising fruits and vegetables in these soil-free systems. They say their production methods are no different from those of farmers who grow plants in dirt — and, they add, they make organic farming more sustainable by, for instance, reducing water use.

“Soil to me as a farmer means a nutrient-rich medium that contains biological processes, and that doesn’t have to be dirt,” said Marianne Cufone, an aquaponic farmer and the executive director of the Recirculating Farms Coalition, which lobbies for aquaculture.

Not so, say the farmers who have spent years tending their soil so that it produces the nutrients plants need. They argue that organic production is first and foremost about caring for the soil, which produces environmental benefits that go beyond growing plants.

“Soil has always been the basis of organic production,” said Steve Sprinkel, an organic farmer in Ojai, Calif. “The soil is alive and releasing micronutrients to plants that use their roots to scavenge and forage those things, and so taking care of the soil is the bedrock of organic farming.”

Sales of organic food in the United States hit $40 billion last year, sending grocers scrambling to find enough organic produce to fill their cases. Keeping up with the demand is difficult and expensive, and financiers and entrepreneurs, many of them from Silicon Valley, have started pouring money into these alternative systems.

Whether the soil-free systems help bring down the price of organic products remains to be seen. Equipment like lighting and organic nutrients are expensive — soil growers count on their dirt to deliver some of those nutrients at no cost — and hydroponically and aquaponically grown fruits and vegetables usually are sold for the same price as organic produce grown in dirt.

“It’s like using an intravenous needle to administer exactly what we think the plant needs instead of allowing the plant to get what it needs in the amount it needs out of the ground,” said Dan Barber, a chef in New York and author of “The Third Plate.”

In the end, the decision about whether these growing systems can continue to be certified falls to the United States Department of Agriculture. In 2010, the Organic Standards Board recommended that hydroponic systems be ruled ineligible for organic certification because they excluded “the soil-plant ecology intrinsic to organic farming systems.” At that time, there were only 39 hydroponic growers with organic certification.

The U.S.D.A. has not acted on the board’s recommendation, allowing organic certification of crops grown in hydroponic systems to continue. According to a survey this year, the number of hydroponic growers with organic certification dropped to 30, but there were 22 certified aquaponic growers and 69 certified operations growing plants in containers lined with things like peat moss and coconut husks that do not provide nutrients on their own.

“The recommendation did not adequately address the diversity of practices and systems in the industry,” Miles McEvoy, the official who oversees the U.S.D.A.’s organic program, said in a statement.

Mr. McEvoy noted that the U.S.D.A. had assigned a task force to report on current practices — but that group split into two camps, mirroring the current debate.

The Organic Foods Production Act of 1990 states: “An organic plan shall contain provisions designed to foster soil fertility, primarily through the management of the organic content of the soil through proper tillage, crop rotation and manuring.”

“To me, it seems simple and always has been,” said Sam Welsch, chief executive of OneCert, an organic certification business in Nebraska that has refused to certify hydroponic produce. “There are things the law and regulations require you to do to the soil that you cannot do in a hydroponic system.”

The Cornucopia Institute, an organic industry policy group, filed a legal complaint with the U.S.D.A. this month challenging certification of hydroponic produce and citing the federal law and regulations that govern organic farming. “They’ve illegally been allowing this to happen,” said Mark Kastel, co-founder of the organization, “and now millions of dollars have been invested in infrastructure and the industry is circling the wagons to protect it.”

The Organic Trade Association, which represents the industry, is lobbying in favor of allowing certification of hydroponically and aquaponically grown crops. Nate Lewis, its farm policy director, said some parts of the federal organic law were clearer than others.

He points to its language on cattle, saying it is clear the animals must have outdoor access and eat organic feed in order for their meat to be certified as organic. But the law for plants, he said, was not so obvious. “I would not agree that the law on this is black and white,” Mr. Lewis said.

David Chapman, an organic farmer in Vermont who has been a leader of the opposition to certifying produce from the new systems, said he would be driven out of business if the U.S.D.A. declared hydroponically grown tomatoes could be certified as organic.

“Most people have no idea that the organic tomatoes and peppers they’re buying are hydroponically grown,” Mr. Chapman said. “I think most consumers believe those things are grown in the soil, and that farmers like me are taking care of the soil as they grow them.”

Some 24 countries in Europe, including England, the Netherlands and Spain, as well as Mexico, Canada, Japan and New Zealand, do not allow organic certification for hydroponically grown produce.

Mr. Chapman said hydroponic producers there would like access to the American market, where they could label their products organic and charge a higher price. In fact, one big Canadian hydroponic grower, Golden Fresh Farms, began building 20 acres of greenhouses in Ohio this year. “In Holland, they’ve gotten so good at producing tomatoes hydroponically that they’ve destroyed their own market, so they’re desperate for access to the U.S. organic market,” he said.

Driscoll’s, the berry company, is one of the largest hydroponic growers, using the system to grow hundreds of acres of raspberries, blueberries and blackberries.

Soren Bjorn, an executive vice president of Driscoll’s, said growing the produce hydroponically was hardly different from what the company does when it grows its berries in sandy soils. “Part of the benefit of that is there’s no disease in the soil, but there’s also very little nutrition in sand,” he said. “So for certain kinds of berries, we add the vast majority of nutrients through irrigation.”

But Driscoll’s takes issue with describing its system as hydroponic. Rather, Mr. Bjorn said, it grows some of its organic berries in containers in beds of peat moss, coconut fiber or mulch. “Hydroponics may also be contained,” but it’s a water-based system, he said, “lettuce floating around on water, for instance.”

Mr. Lewis of the Organic Trade Association said, however, that little distinguishes a container system from a hydroponic system. “There really isn’t much difference,” he said.

Colin Archipley’s farm, Archi’s Acres, grows kale, herbs and other produce hydroponically in greenhouses in San Diego. He is frustrated that there is even a debate over whether his produce is organic.

“The reason this has become such a big deal is that systems like ours are becoming more popular because they’re more efficient, which means farmers are more sustainable and profitable,” he said. “That’s put competition on farmers, specifically in Vermont, and so what this really is about is market protection.”