Posted on January 20, 2017 by Office of Public Affairs 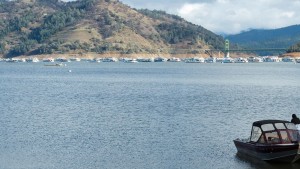 Amid what’s shaping up to be one of California’s wettest winters on record, the State Water Project on Jan. 18 upped its anticipated deliveries to at least 60 percent of requested supplies.

The boost from 45 percent is the Department of Water Resources’ second allocation increase in less than a month, and it comes as many of its gauges in the Central Valley have recorded twice the normal rainfall for this time of year.

Still, department spokesman Doug Carlson said it’s too soon to know whether the project’s 29 contracting agencies will get their full allocations for the first time since 2006.

“We still have a ways to go,” he said. “The winter could turn off the spigot as quickly as it turned on. We’ll just have to continue to monitor and assess whether this is a good, wet year.”

It has been so far, he said. In fact, precipitation totals at more than a dozen California Data Exchange Center stations from the northern Sierra Nevada to the San Joaquin Valley are trending higher than at this point in 1982-83, the state’s wettest year on record.

“That just jumps off the page at you,” Carlson said.

The latest allocation increase follows the DWR’s announcement on Dec. 21 it would deliver at least 45 percent of requested deliveries, up from its 20 percent initial allocation in late November.

Under the current allocation, SWP contractors would receive more than 2.5 million acre-feet of the 4.17 million acre-feet they collectively sought. An acre-foot is enough water to supply two typical households for a year.

Reservoirs have risen to the point that water officials have had to make releases to make room for more storms and spring runoff, raising levels of the Sacramento River and other rivers to near their banks.

Water officials say a 100 percent allocation is difficult to achieve even in wet years because of Sacramento-San Joaquin River Delta pumping restrictions to protect imperiled fish.

The U.S. Bureau of Reclamation typically makes its first allocation of CVP water in mid-February, though last season’s was on April 1.