Even after epic storms, drought still formidable – from the San Francisco Chronicle

Posted on February 1, 2017 by Office of Public Affairs 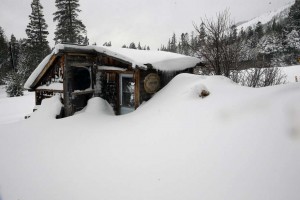 The blizzards that ravaged the Sierra Nevada in the past month wiped out more than a third of the California snowpack deficit that built up over five years of drought, a team of scientists said Monday, while encouraging state residents to continue conserving water.

The storms deposited roughly 17.5 million acre-feet of frozen water in the Sierra, or 37 percent of what’s called the “snow water deficit” in the state, according to a study by the University of Colorado and NASA’s Jet Propulsion Laboratory.

“This winter, from my viewpoint, dropped an impressive amount of snowfall and made a significant dent in the water deficit, but it certainly didn’t come close to relieving the total deficit for the entire drought period,” said Noah Molotch, a research scientist at the NASA Laboratory and director of the University of Colorado’s Center for Water, Earth Science and Technology.

The snow water deficit is defined as the amount of frozen water below what is normal for a period of time. California’s average yearly deficit during the drought was 10.8 million acre-feet, according to the study, or 54 million acre-feet from 2011 to 2016, said Molotch, who led the study.

The storms in January dumped enormous amounts of rain and snow, breaking records and filling almost every major reservoir. In the northern Sierra, more rain has already fallen this winter than during an entire average year. The water content of the snowpack across the Sierra is now about 180 percent of normal for this time of year.

The heaping snow drifts prompted the government’s Drought Monitor to classify 49 percent of California as free of drought last week, a recovery from the 5 percent figure a year ago. All of the Bay Area, except for a tiny portion of Santa Clara County, was drought-free, according to the federal index, as was the northern half of the state, from San Francisco to the Oregon border.

The problem, Molotch said, is that California pumped huge amounts of groundwater to keep people and crops hydrated during the drought, depleting what is essentially a water savings account.

“It’s pretty clear that we aren’t going to be able to put water back into that savings account as fast as we were able to take it out,” he said. “For three weeks’ worth of snowfall it was pretty amazing, so there is reason for optimism, but one snowy winter will not be able to reverse multiple years of drought.”