Farm to Family: meeting a goal, still working to meet the need – Op-ed in the Salinas Californian

Posted on March 2, 2017 by Office of Public Affairs 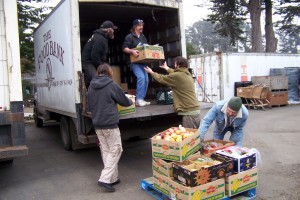 Note – This has also appeared in the Visalia Times-Delta and the Tulare Advance-Register newspapers.

Nearly seven years ago, the California State Board of Food and Agriculture set an ambitious goal – work with the state’s farmers and ranchers to double contributions of fresh foods to food banks; from 100 million pounds to 200 million pounds annually.

Today we are proud to announce we have exceeded that goal. More than 214 million pounds were donated in 2016 through the California Association of Food Banks’ Farm to Family program as well as through direct donations to local food banks.

As we take a moment to congratulate agriculture for its commitment to this cause, we must also recognize that we’re far from finished. The fact remains that more than 2 million children in California live in food insecure households. All told, one in eight Californians struggles with hunger – roughly 5.4 million people.

The problem is immense, and the fact that it occurs in a state with such an enormous bounty of food makes it even more glaring. In an unacceptable twist of irony, many of these families live in rural areas, work in farming, and help produce our food.

Many live in low-income communities that have become “food deserts” with no grocery stores that sell fresh fruits and vegetables. Those families may turn to convenience or fast foods that are cheaper but may lead to diet-related illnesses such as diabetes, heart disease, and obesity.

The Farm to Family Program helps to transform lives not only by providing fresh food but also by improving nutrition by delivering vegetables, fruit, grains, dairy, eggs and meat.

More than 100 growers contribute in excess of 50 varieties of produce to Farm to Family. Farm products are distributed each year to the California Association of Food Bank’s 40-plus member food banks and their networks of 6,000 schools, churches, senior centers, soup kitchens and other community venues. And with many of our food banks providing nutrition education together with cooking demonstrations and recipe cards, food bank clients are learning practical ways to bring fresh fruits and vegetables into their diets.

So as we say thank you for exceeding this goal, we also want to urge our farmers and ranchers to keep it up. There are many valued organizations working in tandem with the California Association of Food Banks to bring healthy and nutritious California food to people in need. They include Ag Against Hunger, the California Farm Bureau’s Young Farmers and Ranchers, Hidden Harvest, and CA GROWN. There are many, many opportunities to get involved, and these groups are more than willing to help make it happen.

The California Association of Food Banks has incentives in place to make donations a little easier, helping to offset “picking and pack-out” cost associated with labor and cold storage for fresh fruits and vegetables, in recognition that donating farm products not only involves the value of the food item, but the associated cost of harvesting, packing and storing. A picking and pack out fee, combined with a state tax credit for donations of fresh produce and the federal donation deduction, means that donating food can also make good business sense for farmers.