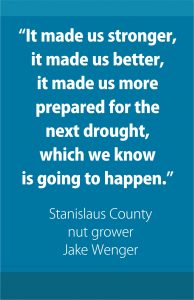 Lessons learned during the multi-year California drought will help farmers and ranchers cope with the next one—and those lessons extended beyond the farm to the realms of policy and public perception, according to farmers who spoke at a water conference in Monterey.

Four farmers from different parts of the Central Valley talked about impacts of the drought during a panel discussion at the Association of California Water Agencies event last week.

Rice farmer Greg Johnson, executive vice president of Far West Rice in Butte County, said he had weathered two droughts during his career—in the early 1990s and the recent one—and that improved technology made “a tremendous difference” in how the farm coped. Zero-grade leveling of rice fields has made water use more efficient, he said, and the availability of online data from the Western Canal Water District allows farmers to keep close track of water usage.

“Now, growers have access to their usage records almost immediately,” Johnson said. “On a daily basis, you can look at what you’ve used and what your allocation has left.”

For Cannon Michael, who grows a variety of vegetable and field crops at Los Banos-based Bowles Farming Co., the drought resulted in an agricultural community committed to finding water-policy solutions for fish and for farms. It also demonstrated to farmers the need to work collaboratively toward those solutions, Michael said.

“I think the overlying understanding is that we all have to work together,” he said. “We’ve got better relationships now between different areas that maybe felt like they were immune to some of the problems that were happening along the west side of the valley for a long time.”

Aubrey Bettencourt, who farms with her family in Kings County and serves as executive director of the California Water Alliance, said the impact of the drought underlined for farmers the importance of communication, whether with water districts, regulatory agencies, county governments, others in agriculture and the non-agricultural public.

“Communication is key,” Bettencourt said. “We’re still learning, still debating how best to do that, but I think we’re getting much better.”

The theme of the ACWA panel encouraged the farmers to discuss what they wished urban Californians knew about farming. More than one participant remarked about the time they must spend in the office, rather than in the field, dealing with the wide spectrum of regulations that govern their operations. They also discussed the constant innovation needed to maintain a successful California farm.

“We’re very quick to adapt new technologies,” Johnson said. “We’re looking for better ways to do our jobs, ways of cutting down on input costs, ways of protecting our farms and protecting the land.”

For California farmers to stay in business, Michael said, “we’re going to have to be at some level recognized for the additional steps we take for paying a living wage, for paying overtime, all these things that even other neighbors in the U.S. don’t do.”

He described himself as “a transformer of water into a useable product that people need and value.”

The drought brought added focus to the amount of water used to produce California crops, and Bettencourt said it showed how the value of water should be based on what that water can produce.

During a discussion of the sustainability of Central Valley agriculture—another topic that arose during the drought—Wenger pointed out that different groups define “sustainability” differently.

The panelists agreed that to remain sustainable, California farmers will need to adapt constantly with new technology, new crops, sophisticated management and continuous awareness of their status in the political and media spheres.

Michael, whose family started farming in California in 1858, put it this way: “Especially in California, you’d better be a pretty shrewd businessperson if you’re going to be around for one generation, let alone six.”

See the original article on the Ag Alert site here.

(Dave Kranz, editor of Ag Alert, moderated the panel discussion at the ACWA conference. He may be contacted at dkranz@cfbf.com.)