Mexican migrant workers came to California to pick grapes. Now they own wineries – from the Washington Post

Posted on June 7, 2017 by Office of Public Affairs

The Smithsonian recognizes five families who have worked their way up in the U.S. wine industry

Outside Robledo Family Winery, south of Sonoma, on a cool April Sunday, the U.S. and Mexican flags whipped a stiff salute in the wind blowing off the San Pablo Bay. A third banner bore the winery logo. The flags represent three themes central to the lives of Reynaldo Robledo and many other Mexican migrant workers who have helped shape California’s wine industry: heritage, opportunity and family.

Robledo is part of a small but growing community of Mexican American families who started as migrant workers and now have their own wineries. They have emerged from the invisible workforce of laborers who prune the vines in bitter winter cold and tend them under searing summer sun. We read about them when they collapse from heat exhaustion in California’s Central Valley or perish in a winery accident. But they rarely appear in the glossy magazines that extol the luxury wine lifestyle, except as cheerful extras in harvest photos.

Five Mexican American families are helping craft the next chapter in the story. They started as migrant workers and now have their own wineries.

They came from Michoacan or Jalisco, two agricultural provinces near Mexico City. Their fathers left for El Norte as migrant workers — some under the Bracero guest-worker program, others crossing the border illegally but gaining legal status in a time when papers were easier to come by. They worked in California’s burgeoning agricultural industry before settling in wine country. They encountered some of Napa Valley’s most celebrated winemakers and contributed to California’s wine revolution in the 1970s and 1980s, a period that saw dramatic changes in viticulture and food culture as the United States became a wine-loving nation.

“Their story is the journey,” says Steve Velasquez, associate curator at the Smithsonian Institution’s National Museum of American History, which honored the families during its annual winemakers’ fundraising dinner in May. “A journey from Mexico to the U.S. to work in agriculture, from a handful of families to a thriving community of Mexican Americans, from vineyard workers to winery owners. . . . These families represent Mexican Americans who once just supported an industry but now help shape it.” 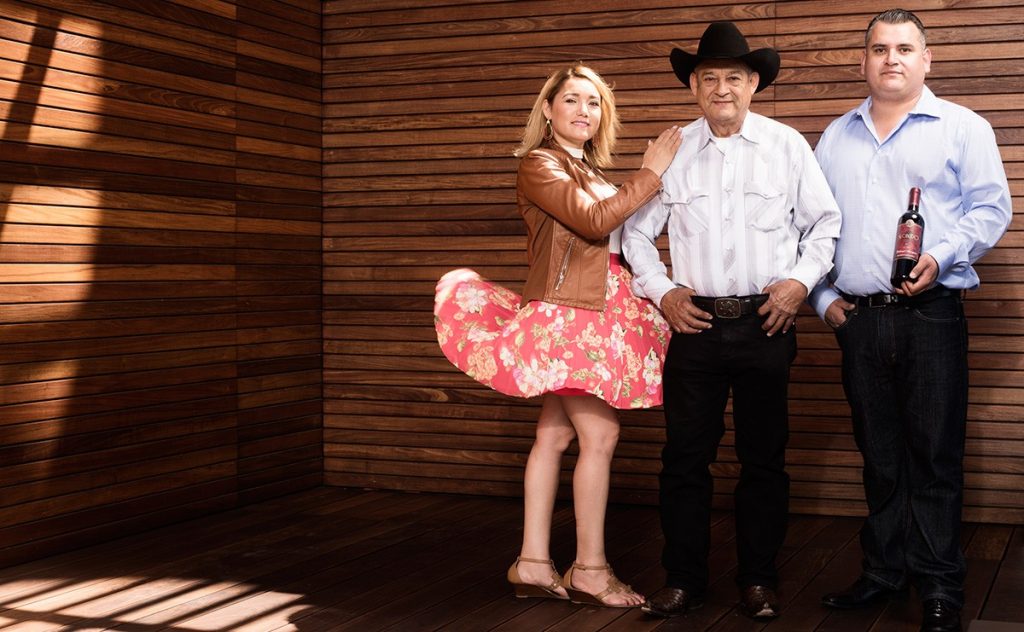 Reynaldo Robledo, center, came to California in 1968 to work in the fields of Napa Valley. Nearly 50 years later, he runs his own vineyard, with the help of his children. Lazaro Robledo, one of Reynaldo’s seven sons, manages the tasting room at Robledo Family Winery. Also pictured is Reynaldo Robledo’s girlfriend, Leticia Trejo. Photo by Marvin Joseph, Washington Post

Reynaldo Robledo tears up with pride as he describes how in 2003, he became the first Mexican American migrant worker in California to open his own tasting room to the public. He displays mementos of other career highlights, including those White House dinners and a 2008 visit to the winery from Mexican President Felipe Calderón.

Robledo’s story began more modestly, and he related it to me in quiet, hesitant English as we sat at a large table made of wood from his native Michoacan state while his youngest son, Lazaro, prepared to welcome the day’s first customers to Robledo Family Winery, in the Carneros region a few miles south of Sonoma.

Even as a young boy in Mexico’s agricultural Michoacan state, Reynaldo was used to being in charge. He was the oldest of 13 children whose father, grandfather and uncles spent eight months of every year working in apple orchards and vineyards in El Norte, and he assumed family responsibilities in their absence.

So as a teenager in Napa Valley, he was quick to seize opportunity, which was plentiful in those heady early years of California’s wine boom. Napa was rapidly transforming from a sleepy agricultural region of prune and walnut orchards into a viticultural powerhouse. An Italian American vineyard manager taught him how to graft vines, a skill that earned him as much as $4.75 per vine. He learned to drive a tractor. Before long he was a crew chief for a vineyard management company planting and managing thousands of acres of vineyards.

Learning the wine business literally from the ground up was not enough. Robledo dreamed of owning his own vineyards and putting his family name on a label. In 1984, he purchased a 13-acre junkyard in Carneros no one else wanted for about $126,000. He cleaned it up, planted vines and sold the grapes to Mumm Napa for sparkling wine. Today, Robledo Family Winery owns or leases 350 acres of vineyards in Carneros and Lake County.

While growing his business, Robledo was also raising a family. He married his childhood sweetheart, Maria, in 1970, and they raised seven sons and two daughters. It wasn’t all bliss and harmony. He and Maria divorced in 2012, and Reynaldo hints at some strong disagreements with his children.

“The boys didn’t understand the business,” he says. “In wine, you invest your money and you don’t see it for a few years. When people don’t understand the business, they want money right away.” Even so, in 2014 he formally turned ownership of the winery and vineyard management firm to five of his sons, including chief executive and winemaker Everardo and tasting room manager Lazaro Robledo, 64, also struggled with the clash of American culture and the patriarchal traditions he brought from Mexico.

“When we first made a sauvignon blanc, I told the family I wanted to call it Seven Brothers for my sons. That was a mistake,” he says with a laugh. “My two daughters were very angry.”

Another wine was less contentious. Los Braceros is a blend of cabernet sauvignon, syrah and merlot. “Braceros means strong arms,” Robledo explained. “A worker could bring his wife and one son. These grapes represent the family: father, mother and son.”

Amelia Morán Ceja of Ceja Vineyards and her daughter, Dalia. Amelia is the first Mexican American woman to be president of a California winery. Photo by Marvin Joseph, Washington Post

When young Amelia Morán moved from Jalisco, Mexico, to Rutherford, Calif., in September 1967, she worked in the vineyards after school. Her father, Felipe, was a manager for Oakville Vineyard Management, which tended the now-famous To Kalon vineyard for Robert Mondavi Winery. Mondavi, who would become the most influential vintner in California, was just in his second harvest, and the winery was not yet finished.

Amelia, 12 at the time, remembers enjoying the work and meeting a young boy her age who had just arrived from Mexico, Pedro Ceja, whom she would later marry. And she remembers liking the To Kalon cabernet.

“Pedro tells everybody I ate the grapes for the first two hours,” she says. “It’s true!”

Her other impressions of food in her new home were not positive. “It was all processed food,” she recalls. She began making her own lunches from recipes her grandmother taught her back in Mexico.

Today, Ceja is an enthusiastic ambassador for Mexican cuisine, filming instructional videos and demonstrating recipes in television appearances. “I want to take the best of Mexican culture — not the macho stuff, that’s no good — and incorporate it with the best from my adopted country,” she says.

Ceja, 61, is the first Mexican American woman to be president of a California winery. She co-founded Ceja Vineyards in 1999 with Pedro and his brother, Armando, the winemaker. They own or lease 150 acres in Napa and Sonoma counties and plan to break ground this year on a winery on their property in the Napa section of Carneros.

Two years ago, Ceja lobbied in Washington for revisions in worker protection regulations that had not been updated since 1992. Her activism grew out of the turbulent labor movement of the 1970s led by Cesar Chavez, who would stay with her family when her father was president of the local United Farm Workers chapter. “I marched with them on Route 29,” she recalls.

“People understood that in order to live a life of dignity, they needed the support of someone to advocate for them,” Ceja says. “Even today, the farmworkers are invisible, and we need to advocate for them. Through our wines we are paying homage to the true artists of wine — the workers.”

Though still a young winery, Ceja Vineyards is preparing for generational change. Amelia’s three children are all involved; Dalia Ceja, with an executive MBA, is sales and marketing director, and Armando’s daughter is assistant winemaker.

“There is an expression in Spanish, ‘Aun hay mas,’ ” Ceja says. “There is much more to come.”