Posted on July 7, 2017 by Office of Public Affairs 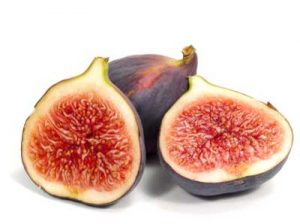 How lucky we are to live in this region’s Mediterranean climate — because we can eat fresh, tree-ripened figs!

Folks who live outside of (our region) may have never tasted a fig pulled right off the tree. A tree-ripened fig is sweet and fruity, luscious, intriguingly flavored, and pure joy on the palate.

Here’s how you can spot a tree-ripe fig. Unripe figs may color up but they’re not quite ripe yet. They stand out from the branch on stiff peduncles — the bit of wood that attaches the fruit to the branch. When the fig is truly tree-ripe, that peduncle softens and the fig hangs loosely from the branch. That’s the signal — and then the race is on — between the human fig aficionado and the little Argentine ants that have turned our state into a giant ant colony — to see who can harvest them first. (They) love figs as much as we do.  Maybe more.

Figs are native to the Levant (the nations of Cyprus, Egypt, Iraq, Israel, Jordan, Lebanon, Palestine, Syria, and Turkey) and have been cultivated for about 11,000 years, making them one of the first crops when agriculture was developed. An early farmer would certainly have loved the fact that they dry easily and store that way for months, providing energy and food during lean winters

For many people, the Black Mission variety, first planted in California at Mission San Diego in 1769, sets the standard for quality. Lovers of yellow figs praise Calimyrna figs, whose amber flesh is sweet and nutty.

If you’ve driven around Fresno on Highway 99, you may have seen acres of fig trees with paper bags attached to them. The bags cover the fruits to prevent over-pollination and subsequent split fruit.

While most figs don’t need pollination to develop, Calimyrna figs do. Of the thousands of cuttings of Turkish Smyrna figs brought to California in the 1880s, not one bore fruit. It was discovered that a tiny fig wasp must pollinate the Turkish figs, and so the wasps were imported to California and now work those paper bag fig orchards producing Calimyrnas.

Calimyrna is a name combining “California” and “Smyrna.” The variety itself, however, is not one produced through a breeding program, but it is from one of the cuttings brought to California in the latter part of the 19th century. It is identical to the Lob Injir variety (a sub-variety of Smyrna) that has been grown in Turkey for many centuries and is considered by many to be the world’s tastiest fig. Figs are nutritious, with sugar, dietary fiber, calcium, potassium and good stores of thiamine, riboflavin and niacin.