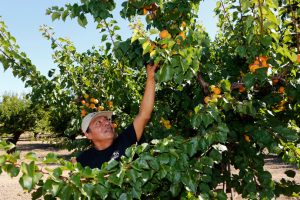 SUNNYVALE — The summer heat brings folks out for fresh fruit, and Charlie Olson has been in the business for over 70 years, bringing Blenheim apricots to Sunnyvale residents since his family moved to California over a century ago.

The farming family tradition began in 1899 when Olson’s grandfather moved to California and started his farm on the land now leased by the family to the shopping center at the corner of Mathilda and El Camino. At age 13, Olson’s father dropped out of school to take over the family business. Olson took over the family business in 1977, three years before his father passed in 1980. He now tends to the 10 acres of apricot orchard owned by the City of Sunnyvale.

“Farming is what I know best; it’s in my blood,” Olson said. “It’s been a romance with me and the orchards and the people around me, it does something for your soul.”

The legacy continues as Olson, now 82, is still operating Orchard Heritage Park behind the Sunnyvale Community Center. Olson’s farm is one of the last of its kind in the Silicon Valley.

The apricot farm has 10 acres left of the original 43 by the Sunnyvale Community Center. According to Olson, there are about 80 trees per acre, meaning the farm has about 800 trees to prune, pick and take care of. There are three additional acres of cherry trees that Olson tends to by the Las Palmas Tennis Center. During season, Olson has between 20 and 25 workers helping. Out of season, Olson operates the farm with only one or two other partners.

The apricot season is during June and July. Olson said the original family tradition was to open the day after the Fourth of July, however, the heat makes the fruit ripen quicker. Now the season starts closer to the middle of June.

“The heat makes the apricots cook on the trees,” Olson explained. “We have to pick them right as they change color.”

Olson said that the market for dried apricots is narrow, especially for the Blenheim apricots that the orchard grows. Olson claims that Blenheim apricots are the sweetest and “best tasting” apricots, but are going extinct as they are the most tedious to care for — it costs around seven dollars to raise one pound of apricots.

As a result, most apricots in the United States are imported from the Middle East. Olson said less than 700 tons of apricots were grown in-state last year.

“Especially with families on budgets, you can get cheap dried apricots from Turkey at Costco in these big bags and we just can’t do that,” Olson said.

Olson said it takes about five pounds of fresh apricots to make one pound of dried apricots. He sun-dries his own apricots across from the barn where his office is.

On the other side of the community center, Olson’s co-worker for the past 25 years, Elisabeth Maurer, runs the fruit stand. There, farm hands sort the freshly picked and dried apricots as well as “Elisabeth’s Jams” made from the apricots and cherries grown in the orchard.

“We have to sort by soft, sunburnt, small, regular — sometimes we get a combination of small and sunburnt and we just make another pile that way,” said Yannah, a recent high school graduate who has been working on the orchard for the past three years.

Maurer said sorting is crucial to different tastes. For example, a sunburned apricot is generally sweeter with a crispy skin. These fruits are discounted as they do not save as long as the regular apricots. Regular apricots cost 15 dollars per five pounds.

Despite the hard work, Maurer said the effort is worth it.

“It really is a labor of love,” Maurer said. “Our goal is to make people happy — and we do.”

Farm stand shoppers said they enjoyed the freshness of the apricots and the fact that the fruit was all local.

“Can’t get fresh fruit like this elsewhere,” said one local shopper, John Lou.

Although Olson and Maurer both love the orchard, Olson says his family farming line probably ends with him. His daughter runs the family apricot and cherry stand that started operating in the 50s, C.J. Olson Cherries, on El Camino and Mathilda. Olson said that the family farming tradition would probably end after this generation.

“People don’t get into it nowadays — it’s hard,” Olson said. “Farm families get up and farm because it is your job, it is what you know. Times change and I’m 82; the line stops here.”