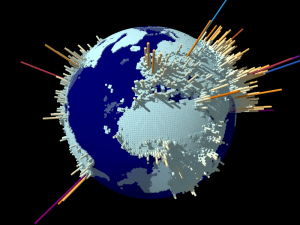 The global population is skyrocketing, the climate is changing, and diets are shifting. So how do you tackle the problem of feeding 9 billion people by 2050? Assemble an elite team of scientists for a year-long brainstorming session.

The first meeting of “Science Breakthroughs 2030” just convened to discuss the key advances essential for revolutionizing food and agriculture in the next decade. The resounding theme: What’s needed is akin to a moonshot. Or as committee co-chair John D. Floros put it, a “green revolution 2.0.”

“This is something we owe to society … to really look forward as far as we can see and find better solutions,” Floros said.

The effort dates to last fall, when the Foundation for Food and Agriculture Research (FFAR) and the Supporters of Agricultural Research Foundation (SoAR) teamed up to commission a report identifying the greatest challenges, opportunities and knowledge gaps in food and agriculture. The National Academy of Sciences answered the call and assembled the panel of eight staff and 13 scientists from institutions across the country. Their expertise ranges from nutrition to climate science to nanotechnology, and the report they’re set to deliver next March will lay out a “strategic vision” for how to rapidly improve the quality and quantity of food.

Half a century ago, scientists similarly asked how to feed a growing population. Their answer: “invest more in agricultural technology,” recounted Floros. That investment kick-started what became known as the green revolution. During it, new crop varieties, technological advances, changes in agricultural practices and shifts in the storage and transport of food all contributed to a dramatic increase in agricultural output.

But according to some experts, that investment and the growth it fueled has begun to stagnate. The U.S. Department of Agriculture’s budget for agricultural research “has been flat for a decade,” noted Robert A. Easter of SoAR. And many green-revolution solutions have reached their limits. Irrigation once made possible an agricultural boon, for example, yet sources for that water are drying up in many places. So the challenge becomes finding new ways to grow crops with less water, Easter said.

Lurking pathogens also threaten the global food supply. “We are one major disease away from starvation,” Floros warned this week. Easter agreed. “We are already grappling with diseases with no obvious solutions,” he said, pointing to citrus-greening disease, which is decimating oranges in Florida. An important cereal crop could be next, Easter added.

Future progress, however, will rely on much more than hardy plants. As discussion in the first “breakthroughs” meeting and interviews afterward made clear, data and computational science already are playing increasingly important roles in agriculture.

“Twenty-first-century challenges require 21st century approaches,” said Sally Rockey, executive director of FFAR. While many people tend to view agriculture as a tradition-bound system, “it really is a cutting-edge science.”

Genomic data is being used to breed new crops and satellite data to identify water and nutrient needs within a field. “There will be data behind every seed we plant,” committee co-chair Susan Wessler said.

There’s even a term for this: precision agriculture. Farmers have begun to use drones and sensors to monitor variations in everything from photosynthesis levels to leaf color. In addition to increasing crop yields, precision agriculture can improve soil and water quality by minimizing the use of excess fertilizer.

Yet work also must be done beyond technology; social sciences and economics come into play. “You can have a great technology,” said Mary Bohman, administrator of USDA’s Economic Research Service, “but if it doesn’t adapt well with [farmers’] business … that technology won’t be adopted.”

The same goes for consumers. “If the consumer does not accept a certain technology … we can have big failures,” Floros said.

Meanwhile, the agricultural workforce is aging and lacks diversity. And, Wessler said, the best and brightest agricultural labs are largely populated by researchers from abroad. In places like China, agriculture is considered a valuable career choice.

Rockey wants the committee to think about “a magnet” to attract young talent in this country. According to Wessler, one powerful hook for students is the opportunity agriculture offers to help humanity.

The Science Breakthroughs 2030 report is targeted for completion before the current farm bill expires. The committee will meet five times this year, mostly behind closed doors. Its initial session was filmed and is available online. To submit comments or ideas to the committee, visit the IdeaBuzz platform.