Posted on July 5, 2017 by Office of Public Affairs 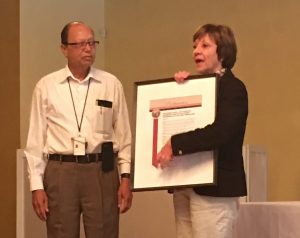 CDFA Secretary Karen Ross presents a proclamation to Nirmal Saini in honor of his 41 years of public service.

Surrounded by his wife, four children, grandchildren, and extended family and friends, Nirmal Saini celebrated his retirement at a luncheon on Friday, June 30. A banquet room full of his colleagues and peers paid tribute to their friend, led by both California Department of Food and Agriculture (CDFA) Secretary Karen Ross and Department of Pesticide Regulation (DPR) Director Brian Leahy.

Nirmal Saini’s career in public service has spanned 41 years, 39 of which were at CDFA’s Center for Analytical Chemistry, also known as the chem lab or just “the lab.” In a nutshell,  the lab protects the food supply by ensuring that various foods and feeds meet established standards, from organics and pesticide levels to a range of other chemical analyses for both CDFA and DPR. As branch chief at the lab, Nirmal has had a hand in every major hire, purchase, upgrade or project for decades. He took a sincere interest in the lives and families of lab employees, serving as mentor to many.

He leaves the lab in the capable hands of people whose careers he has nurtured throughout his tenure. Their work is informed by his example and inspired by the spirit of his service. Thank you, Nirmal,  and congratulations.