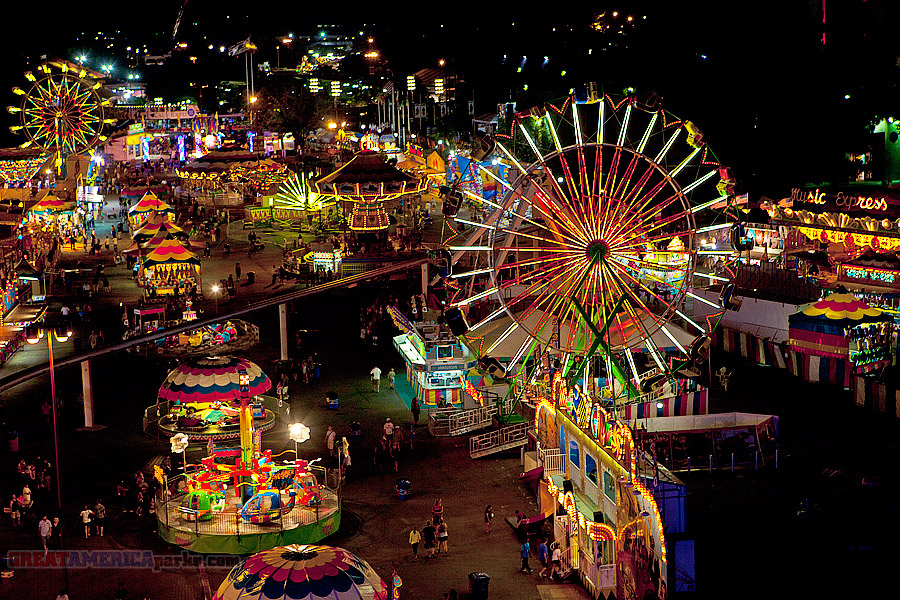 All over California, it’s “fair season.”

County fairs are serving up the best that California has to offer and, in our capital city, the California State Fair is in the midst of its Golden Anniversary season at Sacramento’s Cal Expo—the 50th year the fair has been housed there! A half-century of corn dogs, fried foods of all shapes and sizes, and dazzling neon midways. But the State Fair’s value to its community and to the state of California goes much deeper than that, and its complete history is much, much longer.

The State Fair began in 1854 in San Francisco, and was a showcase for agriculture: fruits, vegetables, flowers, grains and livestock. That tradition carries on today and is an anchor at the State Fair as well as many local fairs throughout California.

Livestock competitions are outstanding opportunities for young people; The Farm at the State Fair features a host of crops; the annual wine competition and tasting pavilion showcase California’s world-class vintages; and the State Fair honors its own heritage by celebrating farmers, ranchers and agricultural groups with 100 years of history behind them. Farming and ranching still drive California’s growth and development, and our fairs take pride in highlighting that each and every year.

The fairs are great venues for Californians to demonstrate their skills in a variety of pursuits. A tour of the many exhibits shows impressive talent in art, photography and design, as well as more traditional agrarian pursuits such as canning and baking. It’s inspiring to see that many of those competitive entries come from our young people.

All of California’s fairs serve as community gathering points. Hundreds of thousands of people flock to them annually, and not just for fair runs. They attend concerts, trade shows and sales events. Cal Expo hosts the Global Winter Wonderland during the holiday season, Sacramento Republic FC during pro soccer season, and a year-round monument to victims of the Sept. 11, 2001, terrorist attack at the World Trade Center in New York City. California’s fairs believe in service to their communities, and they are committed to the idea that the fair run is just the beginning.

Our fairs also serve as critical emergency shelters. They have housed the homeless during the cold winter months, stood by as cooling centers during periods of extreme heat, and stepped in time and time again to serve as shelters for people and animals in times of natural disaster, as well as command posts for emergency responders working to overcome those disasters.

Just recently, as a devastating wildfire burned near Oroville, the fairgrounds in Chico opened its gates and prepared to work with other emergency organizations to provide a range of services to evacuees. There was also a fire camp set up on the grounds at the Siskiyou Golden Fair in Yreka, and they housed animals at the Calaveras County Fairgrounds  in Angels Camp due to local fires, as well.

A heartwarming example of these disaster-response efforts came earlier this year, when a Northern California couple forced to evacuate due to the threat of collapse at the Oroville Dam went ahead with their planned wedding at their emergency shelter, the Placer County fairgrounds. A squadron of volunteers came together to arrange for a tuxedo and dress, food and drink, and even a limo and wedding night lodging. At the San Diego County Fair, there is an annual event, “My Big Fair Wedding Day,” featuring couples getting hitched at the fair’s annual garden show.

As fairs move into the future, they will continue to look for ways to fully integrate in their communities in a year-round fashion. It’s important to remember they are bona fide public assets and essential institutions that serve Californians in many significant ways.