Posted on August 1, 2017 by Office of Public Affairs 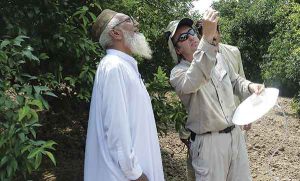 UC Riverside entomologist Mark Hoddle in Pakistan on a search for natural predators for invasive species.

Mark Hoddle sees a hidden world that others often overlook.

“The most fascinating and really important stuff that’s happening all around us is too small for 99 percent of people to see,” he said.

Hoddle’s expert eye is trained on the world of bugs, a dramatic landscape with predators and prey locked in a primal struggle for survival. Watching them in his garden was one of Hoddle’s earliest enthrallments. As an entomologist and extension specialist in biological control for the University of California, Riverside, his childhood passion has become a life’s work, using the insect food chain to protect gardens, farms, orchards, urban landscapes and forests from invasive insects.

Hoddle relies on the unsung heroes of the insect world: natural enemies of bugs we consider pests.

“Most people’s reaction when they see an insect is they want to kill it,” Hoddle said. “What they don’t appreciate is that (people are) often killing things that are really helpful.”

Bugs to the rescue

Beneficial bugs come in many forms: winged and crawling beetles, tiny mites, carnivorous caterpillars and parasites that live on or in their hosts, even laying eggs inside their hosts’ bodies. California is home to many native species of these beneficial, natural-born killers. But when invasive, non-native pests make their way to a new territory where there are few natural enemies that feed on them, their populations can explode, Hoddle said.

“It’s kind of mind-blowing to think that that one insect had the potential to derail California’s citrus industry right at its inception,” he said.

That’s when the chief entomologist for the U.S. Department of Agriculture did something that had never been done: He sent a colleague to Australia to find the pest’s natural enemy in the wild.

The scientist returned with a few hundred small vedalia beetles that he’d collected and managed to keep alive during the weeks-long sea voyage. After the USDA liberated the beetles in California, the problem disappeared completely within nine months, Hoddle said.

“The citrus industry couldn’t believe how spectacular this biological control program was,” Hoddle said. “That beetle is still working in California today, and you don’t have to spray your trees for cottony cushion scale.”

It was the birth of a revolutionary new approach to pest management, and California remains a world leader in biological control. The approach is more essential than ever in an age of globalized trade and transit. The annual rate of the introduction of non-native insects into the state has accelerated by 50 percent since 1989, Hoddle said.

Hoddle spends much of his time studying invasive pests, combing the globe for their natural enemies, and rearing and studying the populations he’s brought back. When a natural enemy with good potential for success is identified, tested and approved by officials for release, it often becomes the job of insectaries to figure out how to raise millions of them at a time.

Associates Insectary in Ventura County is the oldest commercial insectary in the nation, rearing several essential beneficial species for citrus and avocado growers. The insectary also sells to growers on the East Coast and in Canada, Mexico and Central America. Brett Chandler, president and general manager, emphasized beneficial insects alone can’t solve all of a commercial grower’s pest problems, but they are an important tool.

“The insects have a tremendous role,” he said. “A significant portion of the pest control is performed by natural enemies in the field—both native and the extra, introduced ones that we add to the field. It is such an integral part of what we do that we don’t even consider how we would function without them.”

Raising 800 million head of tiny “livestock” each year is a job that never gets boring, Chandler said.

The result is a complex, highly synchronized operation in which different species of insects are raised through all life stages in 43 separate, climate-controlled rooms. The insects are sensitive to subtle changes in the environment, such as atmospheric pressure, and have a herd behavior that changes daily, Chandler said.

Link Leavens of Leavens Ranches in Ventura and Monterey counties is one of 150 member-growers who benefit from the program. For 25 years, the insectary’s production of a parasite called Aphytis melinus has helped Leavens control red scale infestations and maintain the delicate ecological balance of his citrus grove.

Waging war on a new pest

Now, Leavens has turned his attention to a challenging new foe, the invasive Asian citrus psyllid. The tiny insect can infect trees with a deadly bacterial disease called huanglongbing, or HLB. The plant disease has caused catastrophic citrus losses in Florida and Brazil in recent years. California growers fear their trees will be next.

Though psyllids have become common pests in commercial citrus groves, so far HLB has been found only in backyard citrus trees in urban areas of Southern California. To help contain the disease, growers and researchers are again turning to biological control.

Hoddle traveled for several years to Pakistan, where the Asian citrus psyllid is a native pest, searching for a suitable natural enemy. He returned with Tamarixia radiata, a tiny parasitic wasp that targets psyllids. A single female can kill hundreds of the pests in her lifetime. After testing and government approval, Tamarixia was introduced in affected areas in 2011. Psyllid populations have since dropped considerably in urban areas, in some instances by as much as 75 percent, Hoddle said.

“We’ve sort of set the battle lines,” he said. “This is urban guerilla warfare.”

For growers such as Leavens, Tamarixia offers an important line of defense and a ray of hope in a desperate fight. Leavens said he tries not to imagine a future where enjoying oranges becomes a thing of the past, but the threat to the industry is real.

“If you don’t control those psyllid populations, HLB will be here,” Leavens said. “We just know it’s coming. We’re kind of treading water.”

Growers are spending $25 million through the California Citrus Pest and Disease Prevention Committee to combat HLB. Leavens, a board member, said they would like to multiply production of the wasp a hundredfold to keep urban psyllid populations at bay. And Associates Insectary has begun experimenting with raising Tamarixia as a possible tool to fight >psyllids in commercial groves.

In this case, biological control won’t likely be the only solution, but it’s an important start. Once again, a tiny insect may just prove one of California farmers’ greatest allies.