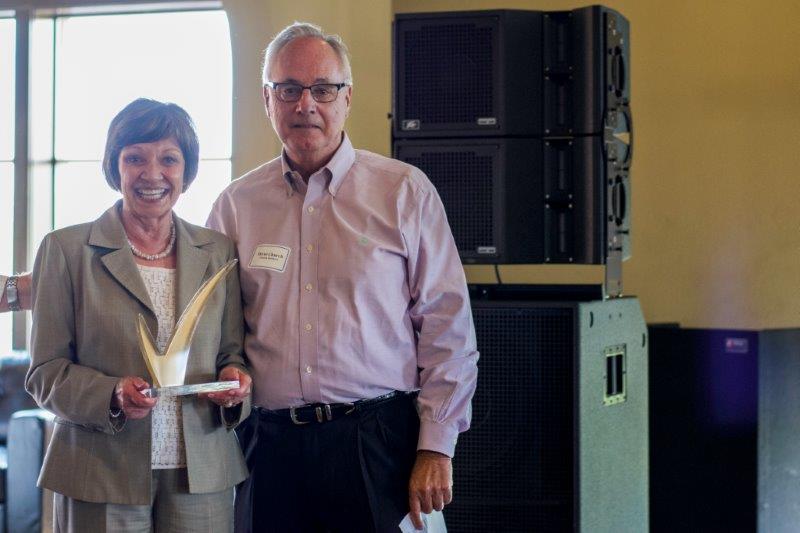 From an LGMA News Release:

“It’s not often that a group of farmers comes to government asking to be regulated,” said Steve Church, of Church Brothers, who serves as the current chairman of the California Leafy Greens Marketing Agreement, “but in the aftermath of the 2006 E. coli outbreak associated with spinach, that is exactly what was needed to help California leafy greens producers regain consumer confidence.

“Without the support of the California Department of Food and Agriculture, the California Leafy Greens Marketing Agreement wouldn’t exist,” continued Church. “In honor of that support which existed in 2006 and continues today, we are presenting CDFA Secretary Karen Ross with the LGMA’s Golden Checkmark Award.”

The Secretary was honored August 10, 2017 during a meeting of Salinas-area LGMA members. The event was the first in a series of grower meetings being held across the state to commemorate ten years since the LGMA food safety program was created and to recognize the commitment to protecting public health embodied in the LGMA system. The LGMA’s Golden Checkmark Award was created to honor those who support mandatory government oversight of food safety in the produce industry. Past recipients include Governor Arnold Schwarzenegger and former CDFA Secretary A.G. Kawamura.

“The LGMA is a true public-private partnership where government and industry work together to ensure safe food,” continued Church.  “Both are committed to this important job and the California leafy greens community is proud to be one of the first commodity groups to be regulated under the Food Safety Modernization Act (FSMA) that will soon become federal law.”

“I’m so proud to be here today and I want to recognize all of the great people who came before me and who are still at the Department of Food and Agriculture who helped create the LGMA,” said Secretary Ross as she accepted the award. “I can only imagine the hours that were spent to come up with this food safety program that is real, robust and represents change.”

Since its creation 10 years ago, the LGMA has included a system of mandatory government audits to verify that leafy greens are being grown using science-based food safety practices. The audits are performed by government inspectors employed by CDFA who are trained and licensed by the United States Department of Agriculture.

“I am always in awe when I see what the leafy greens community has done with this program,” Secretary Ross continued. “You have transformed an industry to establish a culture where everyone is thinking about how to make sure the food we’re delivering is safe. What you have accomplished in a remarkably short period should be held up as an example.”

CDFA will be responsible for overseeing implementation of the Produce Safety Rule included under FSMA for an estimated 20,000 California produce farms under a cooperative agreement with the U.S. Food and Drug Administration. According to Ross, her department plans to work closely with existing industry groups like the LGMA to ensure compliance with the new law.  The LGMA has been working over the past several months to ensure its food safety practices are aligned with those required under the FSMA Produce Safety Rule.