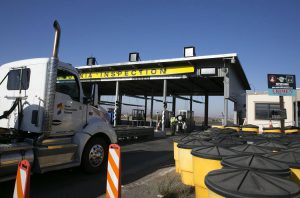 CDFA’s Border Inspection Station on I-15 near Yermo.

Drivers speeding into California along southbound Interstate 15 usually come to an abrupt, but necessary, stop about 100 miles past the Nevada border.

And just like that, a worker usually waves them past a giant, yellow “California Inspection” sign designating the Yermo Border Protection Station.

Big rigs, RVs, livestock haulers and other large vehicles are occasionally pulled aside so that inspectors can determine whether fruit flies, gypsy moths or other potentially dangerous insects are hitching a ride on a vegetable or piece of fruit.

“It’s the first line of defense,” said Steve Lyle, a spokesman for the California Department of Food and Agriculture. “The main role of the stations is to prevent invasive species from entering California, helping the department fulfill its mission to protect the food supply and the environment.”

In the next couple of years, motorists leaving Las Vegas can expect to stop and have their produce checked a whole lot sooner.

Construction could start as soon as fall on a $47 million agricultural inspection station about 7 miles south of the Nevada border, aimed at keeping scofflaws from taking bypass roads to avoid the current facility, Lyle said.

Plus, the old facility, built in 1963, “has become antiquated and is deteriorating,” Lyle said.

An opening date was not disclosed, but the Yermo station’s staff of 22 permanent employees and 10 seasonal workers are expected to be transferred to the new facility.

More than 600,000 vehicles got an up-close physical inspection last year at the Yermo station, Lyle said, with 245 commercial shipments and 637 items from private vehicles rejected for failing to meet California’s stringent standards.