Fire emergency: scenes from a fairgrounds evacuation center – from the Los Angeles Times

Posted on October 10, 2017 by Office of Public Affairs 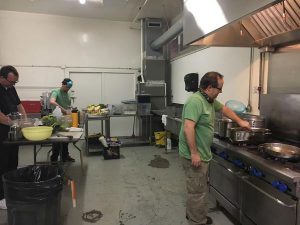 Will Gross (center), who lost his home in a fire two years ago and found shelter and assistance at the Napa County Fairgrounds in Calistoga, returned yesterday as a volunteer. Picture by Paige St. John, Los Angeles Times

Two years ago, during the Valley fire, the Napa County Fairgrounds in Calistoga, Calif., was the scene of a tent city of evacuees, along with massage therapists, puppet artists, drum circles and food catered by the best of Napa Valley.

On Monday, smoke from the nearby Tubbs fire left the same evacuation shelter all but deserted. But it didn’t stop determined volunteers from showing up to give what they could.

Among them was Will Gross of Cobb.

“I lost my house in the Valley fire. These guys helped me out, so I thought I’d help them,” Gross said as he scooped watermelon and cantaloupe into a fruit salad in the shelter’s kitchen.

He worked beside two professional cooks – Ed Burke, the food service director for Calistoga joint unified schools, and Andy Wild, special events director for the fabled Culinary Institute of America, which has an academy near Napa.

A late-afternoon shift in the wind (Monday) sent smoke from the nearby Tubbs fire into Calistoga, driving out many who sought shelter there at the Napa County Fairgrounds.

Fairground employee Monica Garibay, who manned the shelter registration desk, ran out of a carton of face-masks donated by a local medical facility.

But she said the generators were working and fairgrounds staff plan to serve dinner at 6 p.m. to anyone whose need for shelter outstripped with her desire for fresh air.

“We are ready! “ said Garibay, a nearly empty community room behind her. Somewhere in the dark of the room, a kitten mewled. Outside, shuttle bus drivers stood ready to take unknown passengers someplace else.