Posted on February 27, 2018 by Office of Public Affairs 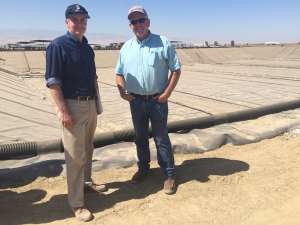 For second generation dairy farmer Felix Echeverria, dairy farming is a family affair. His father, an immigrant from Spain’s Basque country, began milking cows in Southern California in the early 1950’s. Since then, Mr. Echeverria and his brother Johnny, have spent most of their mornings on dairy farms, waking early to milk the cows, put out the feed and check the water.

Yet for the next generation of Echeverria dairy farmers, there will be a new addition to the sights and sounds of an early morning on the farm – the humming of a dairy digester producing electricity.

The CE&S digester will work by using a high-density synthetic cover to capture methane from the dairy’s manure lagoon. The captured methane will be stored and then combusted in a high-efficiency generator, producing renewable electricity. By using this system, the CE&S Dairy Biogas is expected to cut its methane emissions by approximately 75 percent and reduce energy costs by 15-20 percent.

Although initially cautious of digesters, Mr. Echeverria says he was ultimately convinced by his trust in neighboring farmers already embracing digesters and the partnership developed with California Bioenergy (Cal Bio), who will own, operate and maintain the digester system.

“At first, we were very skeptical because this is something we knew very little about,” said Mr. Echeverria. “But having trust in my neighbors and seeing the changes that digesters bring led us to building our own.”

The CE&S project is also part of the Kern County Dairy Biogas cluster, a group of sixteen dairies with approximately 100,000 cows, that would collectively produce 2.5- 3 million cubic feet of biogas per day and 1.5- 2.5 million diesel gallon equivalents per year. The renewable energy created through the cluster would support the state’s sustainable transportation efforts and generate enough fuel to power 100,000 cars across the country every year.

Mr. Echeverria applauds the state’s desire to work collaboratively with industry in developing digester projects. To date, the DDRDP has helped fund 24 projects across California, capturing an estimated 5.7 million metrics tons of CO2e over ten years.

“I am truly delighted about the partnership between industry and government.” said Mr. Echeverria. “It’s a huge step in the right direction.”