Posted on February 21, 2018 by Office of Public Affairs 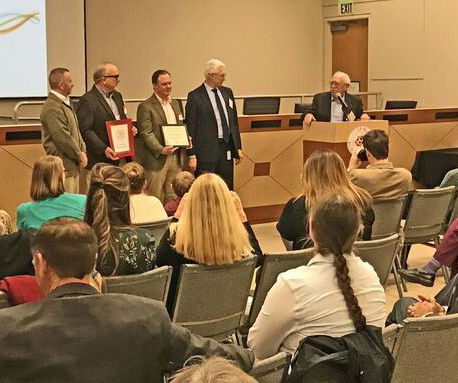 From a California Department of Pesticide Regulation news release

The California Citrus Research Board (CRB) has received an Integrated Pest Management (IPM) Achievement Award for its work in establishing biological controls for the Asian citrus psyllid.

The awards, bestowed annually by the California Department of Pesticide Regulation (DPR), recognize organizations that use IPM to address the diverse pest management needs throughout California. IPM is a tool that allows the management of pests by using natural and preventative strategies, and thus reducing the use of chemical pesticides.

In 2010, the CRB established a task force to help control an invasive insect pest called Asian citrus psyllid (ACP), a serious threat to the citrus industry. Psyllids can infect citrus trees with a bacteria that causes huanglongbing (HLB), or citrus greening disease. There is no cure for HLB and it is fatal to trees. The CRB Joint Agency Biological Control Task Force is comprised of CDFA, the University of California-Riverside, the USDA and Cal Poly-Pomona.

Instead of relying solely on conventional pesticides to fight the psyllid, the task force developed a program using natural predators as a means of reducing ACP populations. The task force imported, reared and studied parasitic wasps from Pakistan that kill ACPs. These wasps are a key part of the first biocontrol program that successfully targeted and reduced ACP populations in urban areas and citrus orchards, in some cases replacing pesticide applications at sensitive urban sites. The project has been successfully implemented in eight counties – San Diego, Riverside, San Bernardino, Los Angeles, Orange, Ventura, and Santa Barbara.

The CRB officially received recognition from DPR earlier this month at an awards ceremony in Sacramento.