Posted on February 28, 2018 by Office of Public Affairs 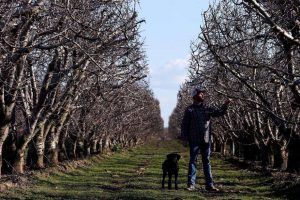 A cherry orchard in the Silicon Valley.
Photo by Santiago Mejia, SF Chronicle

For four generations Chris Borello’s family has been farming cherries in the Santa Clara Valley, hopscotching their orchards south as developers bought out their land for housing.

So it was no surprise when a white van came up the long dirt driveway to his orchard in early February. The visitors were interested in his 115 acres, sure enough, but not as developers or speculators. They were farm preservationists looking to buy his development rights, in what is called an agricultural conservation easement.

“We could farm it forever,” Borello said, “if we can work out an easement.”

The van carried members of the Santa Clara County Planning and Development Department and the Santa Clara Valley Open Space Authority. They’ve partnered up to use cap-and-trade funds earmarked for mitigation of greenhouse gas emissions and loss of land to high-speed-rail to keep farmers farming. The statewide program, called the Sustainable Agricultural Lands Conservation Project, has committed $76 million, and high-speed rail $20 million, all to be disbursed through the Department of Conservation.

“This creates a huge possibility to take the southern part of our county and build an economic model that redeploys agricultural uses in a modern way,” said Dave Cortese, a third-generation San Jose apricot and prune farmer, a member of the Santa Clara County Board of Supervisors.

The Santa Clara Valley Ag Plan, as it is known, is the first of its kind to merge protection of farmlands with California’s climate strategies, by replacing the incentive for growers to cash out to land speculators.

Any day now, the first deal is set to close, Fountain Oaks Ranch, a 70-acre bell pepper and sweet corn farm next to a golf course in Morgan Hill. The price was $7 million, split between the city of Morgan Hill and the state. It is probably the most expensive agricultural easement ever purchased by a public entity in California.

We have a tremendous agricultural heritage here,” Cortese said, “and we’ve lost thousands and thousands of acres and it continues to happen.”

When Cortese’s grandfather came here from Italy, the orchards and rows of crops extended from Los Altos to Gilroy. It was called the Valley of the Heart’s Delight, and the area’s canning operation was said to be the largest in the world.

Then the computer industry arrived and began its march southward from Stanford University through Mountain View, Sunnyvale, Santa Clara and San Jose. Today, the next area in its path is Coyote Valley, a long and narrow belt of 7,500 acres on a patchwork of borderlands between the city limits of San Jose and Morgan Hill.

One-third of this acreage was annexed by the city of San Jose decades ago, and a freeway exit off Highway 101 is already there, four lanes and an overpass at Bailey Avenue. This was the exit intended to service a 700-acre Cisco Systems campus that never got built on city land north of Bailey. It was recently one of the areas proposed to Amazon for its second headquarters, but San Jose did not make the cut.

“Bailey Avenue was built for the city that never came,” said Andrea Mackenzie, general manager of the Santa Clara Valley Open Space Authority. “It is zoned for industrial development, but it can be saved still.”

The acreage north of Bailey Avenue is designated for a tech campus, but for now the freeway exit leads only to farm roads to the west of Highway 101 and the Coyote Ridge Open Space Preserve to the east. Standing on the frontage road, Mackenzie looks north and west across nearly 2,000 acres. “Last Chance Valley” she likes to call it.

“Speculation has been hanging over Coyote Valley for decades,” she said. “It was supposed to be developed so many times over the years.”

The larger valley south of Bailey Avenue would appear to be safe because it has been designated an urban reserve through 2040 under the general plan of the city of San Jose. Farther south is an unincorporated greenbelt that serves as a buffer between San Jose and Morgan Hill.

But Silicon Valley was built by paving reserves and greenbelts. To further protect Coyote Valley, the Ag Plan has identified 33 growers, all but three below Bailey Avenue. They raise alfalfa, oats, wheat, grain, mushrooms, cut flowers, and a broad array of vegetables, nuts and fruit. One by one, these growers will be visited by the same white van with a county seal that visited Borello.

The county agents are not looking for a quick sale, and they are not lowballers. They will pay the full appraised value as reviewed by the state’s Department of General Services.

“We have just one tool. We will approach them and say, ‘Can we buy a conservation easement on your property?’ said Rob Eastwood, planning manager for Santa Clara County. “The goal is to get easements on thousands of acres from willing sellers.” Once the easements are in place, they last into perpetuity. If the land is sold, the easement goes with it.

The Santa Clara program is lacking a clever acronym but is otherwise a copy of MALT, the Marin Agricultural Land Trust, begun in 1980. Now a national model, MALT buys conservation easements on farms and ranchlands and assists landowners with stewardship, mostly in the remote areas of unincorporated West Marin. In late January, MALT closed on a 609-acre easement in Marshall, to take it beyond 50,000 acres total.

Last year, MALT spent $3.5 million on conservation easements, funding largely by a quarter-cent sales tax approved by Marin County voters in 2012. The Santa Clara County Ag Plan might also need a voter initiative to attain a dedicated stream of funding. A two-year study, accepted by the county Board of Supervisors in January, identified 28,391 acres of farmland at risk of development to add to 21,171 acres that have been paved over in the past 30 years. To save what is still green might cost $100 million, which will far exceed funds available from the state.

“If agriculture is to not only survive but thrive in Santa Clara County, we need a coordinated set of strategies that recognize the contribution of working lands to a resilient and sustainable region,” Mackenzie said.

The test case for the Ag Plan is Borello’s cherry orchard, which is zoned agricultural and sits 3 miles south of the San Jose border and 2 miles north of Morgan Hill.

“We are ranchers,” Borello, 36, said of his family business, “but we are also real estate developers.”

Most recently, his family went through the entitlement process for 120 acres in Morgan Hill that it then sold as Borello Ranch Estates to Toll Bros. It is being chopped into 244 homes, starting at 3,000 square feet. Borello won’t give the price he got, but flat farmland in Morgan Hill that has already been entitled goes for $1 million an acre.

In July, he and two partners then bought this mature 115-acre cherry grove in Coyote Valley from another cherry farmer. The land, which might be on the route of the high-speed rail line, is so expensive that every dollar he can pull out of his cherry crop will service the debt. The only profit is in entitling the land for residential or industrial use.

But that could take 10 to 15 years, he says, and there are no guarantees. If he could come to terms with the Ag Plan, the deal could be done in less than a year and he could get $10 million. That could keep him farming cherries, and he’d be willing to consider public access to the land, via trails.

“I love the idea of keeping the land open,” he said. “But if everybody wants to look at it, everybody should pay for it.”

Borello sits on the Board of Directors of the Santa Clara County Farm Bureau. If he sells his development rights to the agricultural easement it might persuade other growers to look at the Ag Plan.

But it might not save the 220 acres of cherries contiguous to his land. That property is owned and farmed by Chris Marchese, who has been in Coyote Valley long enough to watch all the farm infrastructure disappear. The nearest packing house for his cherries is now in Lodi, 100 miles away.

The orchard is within the San Jose city limit, though it has no city services, and he says it has long been zoned for housing. Only tradition and guilt have kept Marchese farming, but they have worn thin. In January, he filed for preliminary review to pursue development of his property into 270 homes.

It may be a long battle because the San Jose general plan designates Marchese’s land for agriculture, and San Jose Mayor Sam Liccardo said in his recent State of the City speech that he favors exploring conservation opportunities in Coyote Valley. But Marchese is adamant that his zoning supersedes the city general plan.

“We need housing, and housing can be had here,” he said. “That Ag Plan is too little too late.”