Posted on March 2, 2018 by Office of Public Affairs

An automated helper is designed to be a helpful companion to farm workers, so they don’t have to carry the produce they pick. 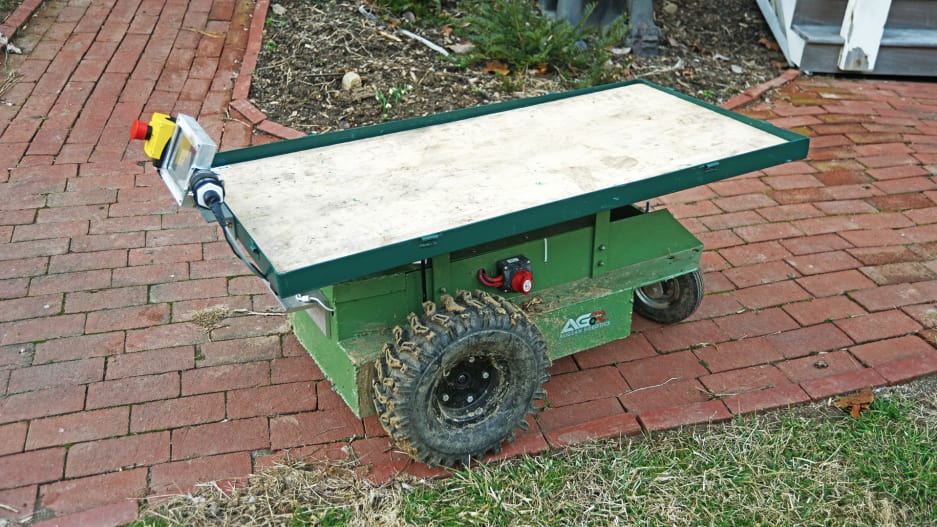 When farmworkers harvest table grapes in California’s Central Valley in 109-degree August weather, part of the job involves repeatedly wheeling about 80 pounds of grapes hundreds of feet down a long row of grapevines. A new robot is designed to do the job instead, leaving workers free to spend more time picking grapes.

“People spend as much as 20%-30% of their time picking in the field actually walking up and down these picked rows,” says Charlie Andersen, CEO of Augean Robotics, the startup developing the robot. For farmers, who are struggling find enough labor to pick their crops–a problem that has grown in the current state of immigration politics–the robot can make labor more productive. For workers, the robot could make a difficult job slightly less painful, and help them earn more. 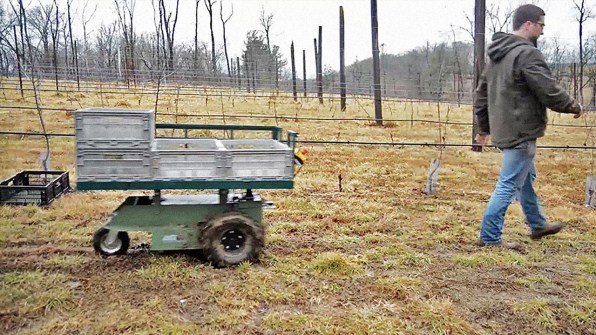 The electrically powered robot, called Burro, is designed to either follow a farmworker around a farm or run loops down rows of grapes or berries. In the “follow” mode, it uses an algorithm to recognize a worker. “You literally approach it and it locks onto you, once you reach a certain point, and then it follows you like a dog,” Andersen says.

The startup, based in a high-density apple orchard outside Philadelphia–the closest East Coast approximation to the California berry farms it plans to serve–is currently working on the second option that allows the robot to travel up and down rows of crops on its own. “Our idea is that you’d actually turn on the machine at the beginning of the day, walk it up and down a couple of rows in a looped path to train it to a path, and then have it re-run that path autonomously throughout the day, functioning as a virtual conveyor belt,” he says.

Today, only a tiny fraction of farms use robots; most are dairies, which robotically milk cows. A growing number of startups are trying to automate harvest of produce. Half a dozen startups are working on robots designed to pick strawberries without human help. In 2017, GV (formerly Google Ventures) led a $10-million round of investment in a startup that makes a robot for picking apples. Burro is designed to work with farmworkers, rather than instantly replace them. It also may come to market sooner. 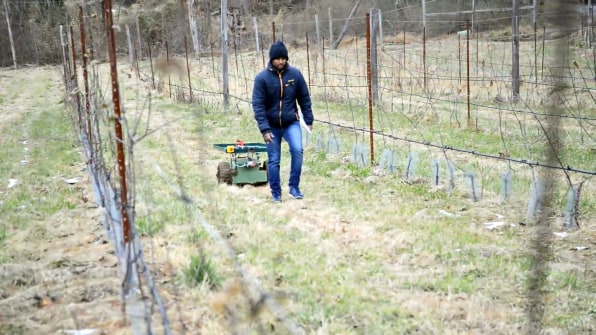 “When you’re in stuff like specialty crops, you have hundreds of thousands of people that are out there doing a lot of high-dexterity tasks,” Andersen says. “Our observation is that when you look at a lot of those tasks, there are consistent portions of those tasks that require shuttling back and forth, but the inconsistent stuff that requires nuance, human dexterity, judgement–some of those tasks feel like they’re very difficult to automate, especially in a full-time, robust commercial setting.”

While other companies continue to work on fully autonomous agbots, Augean Robotics hopes to fill a gap sooner, and also hopes that Burro can serve with other ongoing tasks, like carrying around potted plants or new equipment to install drip irrigation. (The robot can do the work of a wheelbarrow for miscellaneous jobs hands-free, and save labor.)

The company plans to begin field tests with large growers later this year.

See the original post on the Fast Company site.

This entry was posted in Farm Labor. Bookmark the permalink.