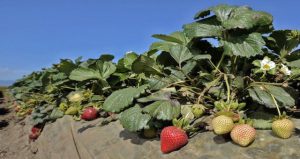 Fresno State researchers have concluded that non-farm workers and businesses that contribute to strawberry production, packing and distribution in five Southern California counties generate more than $2.7 billion in revenues annually.

The study, commissioned by the California Strawberry Commission, was conducted by economists who determined that a wide range of businesses in the counties support the state’s fourth largest crop.

“Our research found that strawberries and Southern California’s urban economy are strongly linked and benefit one another,” Annette Levi, a professor and chair of university’s Agricultura Business Department, said in a press release from the Strawberry Commission. “We were surprised at the interdependence between rural farming and jobs in Los Angeles and Orange Counties.”

“What made this research so unique is that it provides a micro-view of a crop’s supply chain within an urban setting,” said Levi, who conducted the research with her Fresno State colleague. “It has long been assumed that California agriculture has a major ripple effect on the urban economy. This study documents how one crop, strawberries, plays a major role in supporting non-farm businesses.”

Other parts of the state where strawberries are commercially produced weren’t included in the study. On the whole, California produces nearly 90 percent of U.S.-grown strawberries.

-Growers in the region contribute another $1 billion of economic activity in the
Southern California counties, for a total of nearly $4 billion in economic returns.

-The supply chain in the Southern California
urban centers has a diversity of companies
providing products and services for the
strawberry industry, including packaging,
precooling, shipping, processing, retailing
and more.

-A number of businesses often boast of a
diverse workforce that includes an equal
number of women and men — many of
whom are Latinos and Asians – with a wide
range of educational backgrounds.