During the week that Ag Day was celebrated in California–last week–the California Farm Bureau’s Foundation for Agriculture in the Classroom teamed up with Sacramento Kings coach Dave Joerger for the first “Farm Day” in Sacramento.  CDFA Secretary Karen Ross was invited to participate and meet the school children attending the event.

More than 1,500 students, teachers and others from the greater Sacramento region converged on the grounds of the California Farm Bureau Federation in Sacramento to learn about agriculture by way of show and tell.

Hosted by the California Foundation for Agriculture in the Classroom with the Dave Joerger Foundation, Sacramento Farm Day allowed fourth-, fifth- and sixth-graders from 16 Sacramento-area schools the opportunity to see, smell, touch and taste different aspects of California agriculture.

Elementary schools participating in the event were largely those with high numbers of children from low-income families, or Title 1 schools, CFAITC Executive Director Judy Culbertson said.

Calling the event “a huge success,” Culbertson said Sacramento Farm Day couldn’t have been possible without the support of the different organizations, partners and staff that helped.

Some 100 volunteers, including from CFBF staff, Zenith, Center for Fathers and Families and Central Valley Farmland Trust, were among those who pitched in. The event also received donations from Earth Tower Gardens, Raley’s, Green Acres, Sacramento Kings Foundation and the Sacramento Municipal Utility District. 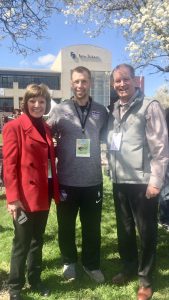 Joerger, head coach of the Sacramento Kings, and California Secretary of Food and Agriculture Karen Ross were among speakers at a lunchtime program that featured a demonstration of herding dogs.

“Students from the area gained firsthand experience in seeing where their food and fiber come from,” Culbertson said. “Agricultural education is more important now than ever before. Thanks to our partners, we are able to show students that agriculture is much more than driving tractors and feeding the cows. It involves science, math, creativity, art and more.”

The event marked the first Farm Day in Sacramento. Farm Day originated in San Francisco in 1980; the idea was to bring the farm to the city and to urban students who otherwise would not be able to experience agriculture up close.

CFBF jumped on board this year by providing the property, staff, volunteers, insurance and other resources “allowing us to do what we wanted to do, to make it a big success,” Culbertson said.