Posted on April 9, 2018 by Office of Public Affairs 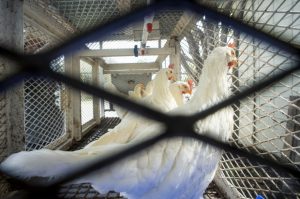 Note – With a focus on equine health, CDFA participates in  California’s Mosquito Borne Virus Disease Surveillance Program, which relies on sentinel chickens as well other approaches. Detections of viruses in horses that may have human health implications–like West Nile Virus–are reported to the California Department of Public Health.

It was 6 a.m. and the sun wasn’t due up for another hour. But vector ecologists Harold Morales and Steve Vetrone were already on the road.

The pair spend most of their days tracking and studying mosquitoes to tamp down the spread of deadly diseases, such as West Nile Virus. But last Tuesday, the pair headed to San Jacinto to snag a semi-secret, very scientific, virus-fighting weapon.

“These guys are out on duty every night,” said Susanne Kluh, the director of scientific-technical services for the Greater Los Angeles County Vector Control. “I love our little guardians.”

For decades, vector-control agencies in California, responsible for fighting insidious disease-carrying pests and rodents, have relied on the domesticated fowl as a surveillance tool to predict when human cases of West Nile Virus and St. Louis Encephalitis are likely to occur.

They are, in a way, the perfect canary in the coal mine for such a task: They sit in coops throughout Southern California 24 hours a day, seven days a week, waiting to get bit. And unlike canaries, the first to die in the mines, chickens don’t get sick from the diseases they contract. Rather, they form antibodies that allow vector control to test their blood.

Throughout the state, there are 139 chicken flocks run by 29 agencies in 25 counties, according to the California Public Health Department. In Long Beach, there are four such chicken coops, one in each quadrant of the city. El Monte has a coop. So does the San Fernando Valley.

But sentinel chickens, as they are called, are increasingly losing favor. Within the last five years, vector control agencies in Orange, Riverside and San Bernardino counties – as well as the San Gabriel Valley – have discontinued their programs. Officials there cite high cost, too many hours put into keeping the chickens healthy and inconsistent results.

“The chickens need a lot of care,” said William Van Dyke, a spokesman for the Northwest Mosquito and Vector Control District, in Riverside. “And they only give us a snapshot of a specific area.”

Others, however, still value the chickens.

“When chickens have West Nile, you know the mosquitoes are positive in that area,” said Lamar Rush, the operations director for Long Beach’s vector control program, which runs three of the city’s four coops. “Mosquitoes bite the chickens and then we can let the human population know.”

A thimble of water.

That’s all it takes for mosquitoes to breed. In fact, they can and will breed virtually anywhere: a puddle, an empty pot or bucket, a stagnate pool. There are 56 species of mosquitoes in California, official say, and more than 3,000 worldwide.

The list of diseases is equally as varied: dengue, yellow fever, malaria. In California, West Nile replaced St. Louis Encephalitis as the premier threat in the early 2000s.

“They are the deadliest animal on earth,” said Nelson Kerr, the manager of Long Beach’s Bureau of Environmental Health, which over sees the city’s vector control.

From 2003, when West Nile began proliferating in California, to last year, there have been 6,566 cases of West Nile in humans, with 289 deaths.

In 2017, Los Angeles County had 287 West Nile cases, including 14 in Long Beach, according to the state’s Department of Health. Orange County had 41, San Bernardino County had 62 and Riverside County had 30.

In the fight against mosquito-borne diseases, the biggest tool, officials say, is prevention – largely through public awareness campaigns.

Bus stop advertisements, for example, exist throughout Orange County. At first glimpse, the ads look as if they are for television’s Shark Week: “The deadliest predator,” the ad reads. But it’s not a Great White on the ad, but rather a blown up image of a mosquito.

Each year during mosquito season, which typically runs from April to October, vector-control agencies send out press releases and mailers warning residents to protect against mosquitoes. Wear long clothing, especially during dawn and dusk, the notices say. Drain stagnate water. Put mosquito-eating fish – free at many vector controls – in your ponds.

At first, officials say, the outreach worked – and the statistics appear to back that up. After peaking in 2005, when 880 cases were reported throughout the state, the number of West Nile cases dropped annually until it reached its nadir in 2010, with 111 cases.

Then, the climb began again.

Because, she added, the danger is real.

Morales and Vetrone arrived at Demler Ranch around 8 a.m. The sun was out, but the gate to the egg farm was locked.

A representative at Demler, the only ranch that supplies chickens to Southern California vector control districts, declined a request for a tour, citing biosecurity.

So when the ecologists arrived, employees of the ranch brought the chickens to them: seven crates of 10 chickens each.

Morales and Vetrone then drove back to Santa Fe Springs, where the Greater Los Angeles’ headquarters is, to divvy them up. From there, they’d drop off chickens at Long Beach, Rowland Heights and Santa Clarita.

The chickens, Kluh said, cost $7.50 each. Not a large sum, she admitted – but there are other costs.

“They are a real pain in the butt,” Kluh said. “They poop and we have to clean it up, it takes work.”

That, among other reasons, is why sentinel chickens are increasingly retiring to the farm – to lay eggs and nothing else.

“Sentinel Chickens are definitely one of the gold standards for monitoring and being a predictor of early human cases,” said Levy Sun, who works for a vector control agency in the San Gabriel Valley, which ended its decade-long chicken program last year. “We would have had to have chickens in every city to have a robust program.”

The San Gabriel agency had 12 coops for 26 cities, Sun said. But, he and officials throughout the region said, that is not nearly enough.

The chickens sit in coops all day. So while they are good indicators of where breeding occurs and – because mosquitoes have short flight ranges – are able to confirm whether West Nile-carrying mosquitoes exist in a given area, there are gaps.

Or, as Van Dyke said, they only give a snapshot for one spot.

“Because they are just located in one place,” he added, “they are not good indicators of all the places West Nile is.”

The Northwest Vector patrols 350 square miles, home to 1 million people. Yet before ending its chicken program five years ago, it had four coops. That – or the one-coop-for-every-two cities ratio of San Gabriel – won’t get the job done.

In Orange County, with a population of 3.7 million across 32 cities, chickens are “not a good predictor of human cases in our geographic area,” said Mary-Joy Coburn, a spokeswoman for that county’s vector control.

“There are faster and more reliable ways to monitor for virus activity,” she added.

And, these officials say, there is one burden above all when maintaining the programs: Even as climate change has lengthened mosquito season, starting often in March and lasting beyond November, vector control budgets have generally stagnated.

“I think a lot of it is they don’t want to pay for the time and manpower,” Rush, with Long Beach vector, said of his regional peers.

By cutting its program, Sun said, the San Gabriel Valley Mosquito and Vector Control District saved $30,000 a year – money it is directing to increasing the number of mosquito traps and enlarging its wild-bird tracking system.

In San Bernardino, the local vector control saved $60,000 by cutting its program. Instead, that agency too is using more mosquito traps, said Lana Cao, a spokeswoman for the San Bernardino Public Health Department.

But there is a second problem – there is a new mosquito in town. And it doesn’t play by the same rules.

Morales and Vetrone pulled into El Dorado Park in Long Beach at about 11:15 a.m., on March 20.

They made a sharp left, and headed down a road closed to the public. The road ended about 30 feet later; the truck rolled onto dirt.

A white, 8.5-foot-long, do-it-yourself coop waited for them.

As did Kluh, their supervisor.

Morales and Vetrone, with the help of a third employee, opened the truck and removed a yellow crate. One by one, they laid the chickens onto the truck’s flatbed. They tagged them.

Then, holding them down, the workers extended their wings and felt for a vein. The needle went in, and blood came out.

Some of the chickens looked mildly annoyed. Others tried to free their wings. A few let out plaintive clucks.

The blood drawn, they went into the coop. To sit, to wait, to get attacked.

Their blood samples, meanwhile, went upstate, to a lab in Richmond.

“It usually takes a couple of days before they post the lab results,” Vetrone said. “But this way we know if the chickens already have West Nile.”

The chickens, for the most part, are well-taken care of: they are in a tree-shaded corner, get regular food and water, and have a place to lay eggs – a perk of the job, if you get to the eggs in time, Morales said.

“I’ve taken a few,” he said. “But if you don’t check on them frequently, they’ll eat the eggs.”

The chickens get their blood drawn every two weeks and sent for testing; a positive test means West Nile-infected mosquitoes are in the area.

That system of surveillance and prevention, however, may soon break down. And it’s all thanks to “aedes aegypti” – better known as the Zika mosquito.

This mosquito – which carries dengue fever and Zika, the disease that can be sexually transmitted and causes deformities in babies if contracted during pregnancy – was first detected in Southern California in 2014.

No local transmissions of Zika have yet been reported in California, health officials say; unfortunately, hundreds of people have traveled to South America and come back with the virus. So it’s only a matter of time, those officials say, before a mosquito here picks up Zika and spreads it.

And the Zika mosquitoes are adept at circumventing standard tracking and prevention methods. For one, they don’t need stagnate water to lay eggs, simply a spot they know will get water; eggs have even been found on discarded candy wrappers.

They are also aggressive – hunting all day, rather than at dawn and dusk. And they typically don’t bite birds: their main targets are humans.

After each chicken was tagged and put in the coop, Morales and Vetrone closed up the truck – one final batch of chickens in the back – and got ready to leave Long Beach and head to Whittier Narrows, in El Monte.

Kluh, who has studied mosquitoes for decades and is viewed by colleagues throughout the region as a superb researcher, stood nearby, talking up the need for sentinel chickens as part of a comprehensive toolkit.

West Nile is still the biggest threat, she said – and besides, researchers can’t rely on humans.

“Humans for us are unreliable for surveillance,” she said. “Someone might live in Van Nuys and go to a barbecue in Burbank, where he gets bit. But he’ll get sick in Van Nuys and the infection will be reported in Van Nuys.”

Chickens, meanwhile, can predict human cases up to four weeks in advance, she said.

Then, the ecologists got in their truck and drove away.

They’ll check on the chickens regularly until the end of the mosquito season.

After the season ends, the chickens do not go back to the farm – where’d they sit in tiny, corporate coops.

Instead, their caretakers thank the chickens for their service – and give them away.