Little is known about elusive beetle species, despite role in wildflower pollination 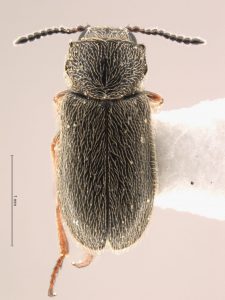 The recently rediscovered Trichochrous kernensis has only been seen once before, in 1913.

A scientist at the University of California, Riverside, has rediscovered a tiny flower beetle that was last seen more than a century ago.

Adriean Mayor, a research associate in entomology, rediscovered the species in April during ongoing field research in California. Mayor said the beetle, Trichochrous kernensis, has only been seen once before, in 1913, when the five original specimens were collected near the town of Havilah in Kern County.

“When something hasn’t been seen for over 100 years, it’s tempting to think it may have gone extinct, or maybe the original research had been in error,” Mayor said. “But here was this beetle, exactly where it was supposed to be.”

Measuring less than 3 millimeters long, Trichochrous kernensis is not easy to spot or recognize.

“I and other entomologists have seen all the related species known from the Havilah area on many occasions, but this particular species had proven especially elusive,” Mayor said. “I had spent some time in the nearby Walker Basin scanning the flowers there but had found nothing. I was walking back to my car when I noticed some black specks in some of the flowers in a wash along the roadside, and, sure enough, the specks were beetles.”

Mayor returned to UCR with a few dozen specimens out of what he estimates were tens of thousands feeding on flowers along the wash.

Trichochrous kernensis is a member of the family Melyridae, which are also known as soft-winged flower beetles. Most adult melyrid beetles feed solely on pollen from flowers and are believed to contribute to the pollination of the majority of wildflowers in California.

Despite this role and their sheer numbers — estimated in the millions or billions for melyrid beetles as a whole — little is known about the biology of these beetles and their larvae.

“In over a century, we’ve only found what amounts to a literal handful of the larvae of this group of beetles, mostly in the soil, but we have no idea what they feed on or how long they live; pretty much everything is guesswork, so it’s a real ecological puzzle,” Mayor said.

Mayor, who recently retired from his position as museum curator for the Great Smoky Mountains National Park in Tennessee, now volunteers at UC Riverside. He is one of only two experts studying this group of beetles in the United States. The beetles he collects, many of which are new to science, are deposited along with 4 million other insect specimens in UCR’s Entomology Research Museum.

This entry was posted in Pollinators. Bookmark the permalink.