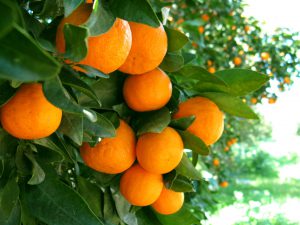 Southern Californians are being urged this summer to help fight a disease that threatens to wipe out the state’s iconic citrus by sharing fruit with friends, family and coworkers only after thoroughly washing it and removing the leaves.

Agricultural officials also ask those who live within a citrus greening disease quarantine zone in Los Angeles, Orange, Riverside or San Bernardino counties not to take fruit outside those areas.

The warning from the state Citrus Pest & Disease Prevention Program comes as the summer travel season heats up and the number of fruit trees infected with Huanglongbing — or citrus greening disease — multiplies across Southern California.

So far, the disease has afflicted residential neighborhoods only and three counties: Los Angeles, Orange and Riverside.

But, as of June 2, the total number of diseased trees statewide had reached 602, up from 370 at the end of last year and 23 at the end of 2016, said Beth Grafton-Cardwell, a UC Riverside extension entomologist who conducts research in the Central Valley.

Grafton-Cardwell said it is a matter of time before the disease reaches commercial groves.

What’s driving the call to take precautions is recent devastation in Florida, which saw its citrus production plummet.

At stake is a $3.2 billion California industry that supports 22,000 jobs, the citrus program says.

The fear of widespread disaster is so great that officials recently covered Riverside’s parent navel orange tree and UC Riverside researchers conducted a study to better understand how the disease attacks fruit-bearing trees.

Citrus greening disease is spread by a tiny bug, the aphid-like Asian citrus psyllid. Infected trees have mottled leaves, and produce deformed fruit that fail to ripen and stay green. And the fruit, though not harmful to people, isn’t fit for eating, officials said.

As for the psyllid, it is tiny, Orange County Agricultural Commissioner Jeff Croy said.

“They are about the size of an uncooked grain of rice,” Croy said. “Most people looking at the plant, because of their size, would never see them.”

“They actually prefer the new leaf growth,” Croy said. “That is their favorite.”

Pellman said the state’s first infected tree was discovered in 2012 in the front yard of a Hacienda Heights home. Then all was quiet until 2015, when the disease began to show up elsewhere, he said.

It since has spread to San Gabriel, Norwalk, Pico Rivera, Whittier, Cerritos and other cities, he said.

To the south, Orange County has recorded more than 330 tree infections — the most of any county, Croy said. Afflicted trees are in Anaheim, Garden Grove, Westminster, La Habra and Yorba Linda.

Arroyo said three infected trees were discovered in a Riverside neighborhood,not far from 15,800 acres of groves that annually produce $200 million worth of fruit.

Quarantine zones totaling 729 square miles have been drawn in wide circlesaround each of those areas.

While the campaign’s primary focus is the industry, officials want to protect people’s gardens, too. More than half of Southern California homes have citrus trees.

“We love our citrus,” Croy said. “And it tears me apart when we have to take out someone’s citrus tree from their yard.”

What to watch for: The Asian citrus psyllid is one-eighth of an inch long and feeds at a 45-degree angle, making it appear thorn-like on leaves and stems. Symptoms of citrus greening disease include blotchy, yellow leaves; deformed fruit that doesn’t ripen; and excessive fruit drop.

What to do if you spot the pest or disease: Call the free California Department of Food and Agriculture Pest Hotline, 800-491-1899.

How to prevent disease spread: Share citrus fruit with friends and family only after thoroughly washing the fruit and removing the leaves.

This entry was posted in Asian Citrus Psyllid. Bookmark the permalink.