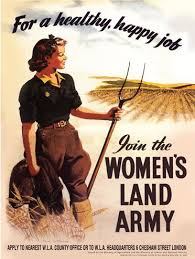 One of World War II’s civilian heroes was the iconic Rosie the Riveter, who represented the thousands of women building planes and ships during the war.

But Rosie’s “mother” shouldered a similar, mostly forgotten role during World War I, helping to save the products of the Inland Empire’s agricultural fields.

One hundred years ago this month, the region’s farms were threatened by the loss of men away fighting the war in Europe. Wartime restrictions also meant fewer foreign workers — mostly Mexicans, Japanese and residents of India — were available.

Coming to the rescue was the little-remembered Women’s Land Army, organized groups of volunteer women — many from local colleges — assembled to work in farms to keep the flow of food going for both military and civilian needs.

The concept grew from a program in Britain where virtually every man was in uniform, forcing women to work the fields and produce food. After the U.S. entered the war in 1917,  it was tried mostly in the East that summer and expanded to other regions the following year. In all, from 15,000 to 20,000 women — called “Farmerettes” — took part in 40 states, according to the National Women’s History Museum.

School teacher Mary Coontz of Pomona was one of the first to become a Farmerette. Coontz, “a sturdy athletic, young lady,” noted the Los Angeles Times of July 3, 1918, enlisted as a truck or tractor driver for the summer but also worked in the fields near San Bernardino.

The article called her a real patriot — “She says the soldier boys need home backing, and that she can do her bit by helping with farm work, as well as by carrying a gun.”

There was no shortage of work. Twenty Occidental College students were assigned to work in the fruit orchards in Lake Elsinore on July 2, 1918, while others were sent to the Hemet area. Six came to ranches in Ontario with more expected in a few days, reported that day’s San Bernardino Sun.

In September, manager James Wolstencroft of the Walnut Fruit Growers Exchange received 10 “Land Army” women, with a matron in charge, from Los Angeles. They worked with the walnut crop in packing houses, reported the Times of Sept. 15.

The biggest impact locally came at a camp set up early in July at Cucamonga Elementary School on Archibald Avenue in Cucamonga. As many as 77 women — many from Los Angeles Normal School (the future UCLA) — were housed there. They worked during summer break packing apricots and peaches at the Golden State Canning Co., and later went nearby to pick grapes.

The young women caused quite a stir in Cucamonga’s otherwise quiet agricultural area. Their camp quickly became a magnet for every young man with a car.

“Archibald Avenue, near the Santa Fe spot in Cucamonga, is trembling under unaccustomed traffic,” wrote the Daily Report on July 16. “Storms of autos from Ontario, Upland and Cucamonga are burning the pavement out East Tenth Street and East A Street headed for the mecca of the Farmerettes.”

The Farmerettes had a strict 9:30 p.m. weeknight curfew which was extended to midnight on Saturdays. They were invited to “jitney dances” and other activities in Upland, usually under the watchful eye of chaperones. Some were allowed to go unaccompanied but only in groups of at least three.

“It is said the girls of Ontario and Upland are protesting because the boys all dance with the Farmerettes,” joked the Daily Report.

The young women on July 13 put on a musical show for all of Cucamonga, with a variety of instrumental solos and songs, followed, of course, by many being escorted to dances in the area.

In the latter part of 1918 — just weeks before war’s end — there was still a need for women to pick dates in Indio and grapes at Delano. Four offices were set up in San Bernardino, Ontario, Redlands and Barstow where women could sign up to work, reported the Sun on Sept. 15.

The Women’s Land Army operated through the following year but was disbanded in 1920.

Of course, just because so many women were doing hard work didn’t mean there wasn’t still a bit of sexism around, even among themselves.

An item in the Los Angeles Times of May 17, 1918, about the Women’s Land Army reported a remarkable observation about the work habits of blondes:

“Blonde women hold their own with brunettes when it comes to willingness to undertake farm work is the discovery by Mrs. M.D. Carr, chairman of the Pasadena Branch of the Women’s Land Army.”

Equality ruled, at least in the Women’s Land Army.