Virulent Newcastle Disease: the view from Kern County – from Bakersfield.com 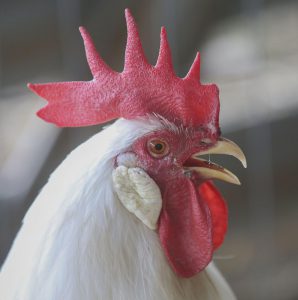 A rooster at a Kern County chicken ranch.
From the Bakersfield Californian

As the guy responsible for more than 2 million hens laying 1.5 million eggs per day, Jeff Peterson took no chances when news broke May 17 the chicken disease called virulent Newcastle had been confirmed in Los Angeles County.

He “locked down” his company’s 160-acre farm northwest of Wasco. Anyone entering had to be screened and sanitized. No more visits from congressmen wanting to see what a cage-free operation looks like.

“We are taking it that seriously,” said the general manager of Central Valley Eggs, one of California’s largest producers. “Any outbreak of virulent Newcastle has the potential to be catastrophic if mishandled.”

Since the lockdown, 64 cases of virulent Newcastle disease have been confirmed in Southern California, prompting state officials earlier this month to declare poultry quarantines in Riverside and San Bernardino counties.

Although no cases have been identified north of Los Angeles County this year, the situation worries local chicken owners, from commercial operators to people with backyard coops on Bakersfield’s fringes. Even the Poultry Committee Chairman of the Kern County Fair is monitoring the situation to avoid an ordeal like what he and the organization endured last time.

Virulent Newcastle poses little or no threat to humans. Eating meat or eggs from infected chickens is no problem. Pink eye and a fever is the worst that happens to infected humans.

But it is fatal and highly contagious to birds including ducks and parrots. In 2003, more than 100,000 commercial birds suspected of having the disease had to be put down. In 1971, nearly 12 million chickens were destroyed because of it.

County records show Kern produced $24.4 million worth of eggs and egg products in 2016, a little more than half the year before’s total. No more recent data are available.

Garcia’s Feed & Pet on the outskirts of east Bakersfield sells baby chicks in an area where backyard coops are common. Employee Genaro Garcia said he fields customer questions about virulent Newcastle disease probably once a month. 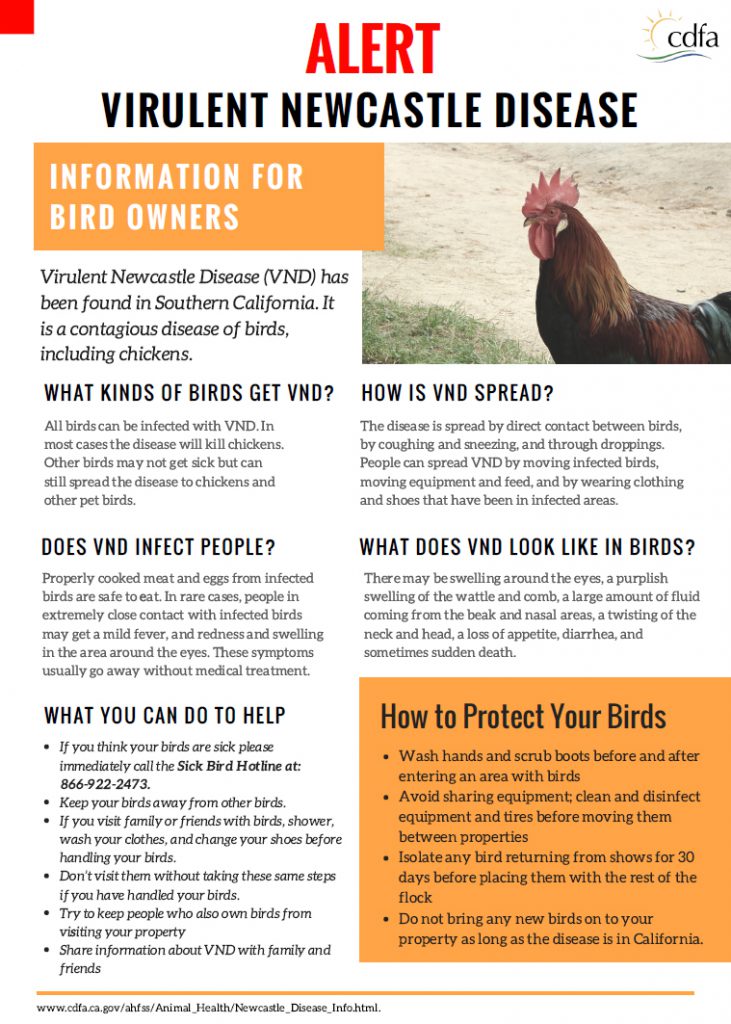 This flyer is being distributed to feed stores in southern and Central California. Find it online

“We usually do tell them to be careful and quarantine” chickens who appear ill, he said, adding the store has given out so many state-produced flyers about the disease in recent months that he’s run out.

Animal feed store The Roundup on Rosedale Highway also sells chicks and gives the same advice. Manager Mikinzi Whitezell noted chickens can succumb to many different diseases. She said people with chickens in the back yard don’t tend to take them to a veterinarian.

Whitezell recalled the time maybe five years ago a customer very experienced with chickens became convinced virulent Newcastle was spreading through her flock. “She ended up having to kill them all,” she said.

Heard said the county is working closely with the California Department of Food and Agriculture — the lead agency on the outbreak — to keep on top of the situation. He said Kern’s commercial egg producers already have in place “biosecurity” measures designed to keep diseases off the premises.

As much as an outbreak would financially hurt commercial producers, he said, it would also devastate people whose chickens feed the household.

Orville Andrews, chairman of the Kern County Fair’s Poultry Committee, is among those paying close attention to the situation. He’s hopeful the state can get it contained, he said, because otherwise things are going to get ugly.

He wants to send a strong message to young people planning to put their chickens in front of the fair’s judges come September: Leave any animal that’s not full healthy at home.

Andrews recalled the scene some years ago when state officials shut down all movement of chickens in California in an effort to halt the spread of virulent Newcastle. This occurred in the middle of the fair and continued for two weeks.

None of the animals ended up testing positive, which was a relief to him. But keeping all the chickens at the fairgrounds was a hassle nonetheless.

“I had to come in and feed and water chickens every day,” he said. “That was tough.”