Posted on May 3, 2012 by Karen Ross, California Agriculture Secretary, and Linda 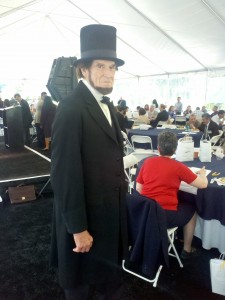 Roger Vincent of Santa Rosa portrays President Lincoln at the University of California’s event, “The Morrill Act at 150.”

I had an opportunity this week to acknowledge and help commemorate a genuinely transformative event in American history. The action itself was simple – the stroke of a pen. And, as it turned out, the man wielding the pen has been immortalized for very different achievements. But this one, in its own way, changed the world.

It was 1862, and President Abraham Lincoln, in the midst of the Civil War, signed a piece of legislation called the Morrill Act, which has served as the foundation for nationwide university access and decades of groundbreaking agricultural achievement.

The Morrill Act granted federal land for states to fund colleges teaching agriculture and “the mechanic arts.” It is hard to imagine California agriculture without the contributions of our own land-grant institution – the world’s finest public university system, the University of California. Through its research, teaching and public service mission, the university has helped position our farmers and ranchers as international leaders in food production and environmental stewardship. So I was honored to be invited as the keynote speaker to the UC’s observance of the legislation’s 150th anniversary.

You could say, as others have, that the Morrill Act was the second Gold Rush – and perhaps the most enduring one, paving the way for every glorious thing California has been and continues to be – from entertainment to aerospace; from urban centers to farming communities; from the beaches of Southern California to the majestic redwoods of the North Coast. Agriculture was the building block, with the rock-solid stability of the Morrill Act and the University of California behind it.

As we look to a future that could require twice as much world food production over the next 40 years, while using fewer natural resources, the vision of the Morrill Act is as important as ever. We are profoundly grateful that the UC is here as our partner. And for that, I say, thank you, Mr. Lincoln!

One Response to Thank you, Mr. Lincoln